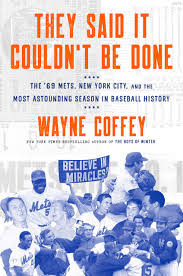 There were many, many feel-good stories in sports in the 20th century, but two topped the list. They were stories that were totally unexpected and featured supposed underdogs who beat the long odds.

One was the 1980 United States Olympic hockey team. I still can't believe they beat the Soviets.

The other was the 1969 New York Mets. After being a generally dreadful team from birth in 1962 through 1968, the Mets became relevant all at once - putting on a spurt down the stretch to win the National League East. Then it was on to wins in the NL Championship Series and the World Series. Take it from someone who watched much of it on television from upstate New York, it was thrilling.

It's probably not a coincidence that miracles are associated with both teams: "Do You Believe in Miracles?" and "The Miracle Mets."

Let's worry about the latter here. It's been 50 years since the Mets won their Amazin' World Series. Since it is a New York team - albeit one that the whole country (except Baltimore) seemed to back that year - some forests were sure to be sacrificed to mark the occasion.

And if you are under the age of 60 or so, you might want to know what all the fuss was about. Wayne Coffey supplies some of the details in "They Said It Couldn't Be Done." (By the way, he also wrote "The Boys of Winter" on the hockey team.)

The format here is rather simple. The first half of the book is dedicated to the regular season, with some of the important games along the way receiving good amounts of coverage. Then it is on to the playoffs, where the Mets swept through the Braves with almost ease and beat the Orioles in five games. That's more of a batter-by-batter review of those eight games.

Coffey adds some needed color along the way with interviews of some of the players - remember that everyone on the roster is at least 70 now, some are in their 80s and others have died. He also talks to a few people on the outskirts of the event, such as some fans (including current Mets announcer Gary Cohen) and a batboy.

The author gives the story its due, hitting the proper high points in the long season. Coffey obviously put in some time during some research here, especially when it comes to watching video tapes of playoff games. In fact, he almost goes a little overboard in that sense in spots.

It will be easy for fans to enjoy the chance to relive that season if they were caught up in it, so the book succeeds in that goal. Still, I would have liked a little more perspective on the season from a distance at this point, instead of what happened at the moment. It's not as if the subject has gone uncovered during the past half-century.

That really would have been helpful in the epilogue. Everyone around the team praises what a collective effort it was, as all players contributed. That's true, as it was a year when just about everything went right. I'm sure it was a close-knit team for that year. But it comes off as a bit of a cliche when a clear-eyed, 50-years-later analysis with modern statistical tools might have been useful to explain what went on. In addition, things were never the same in the next few years after that, and it would be interesting to hear what some theories are about that - besides that Amos Otis for Joe Foy deal blowing up.

Then again, maybe Coffey - who also wrote a book on the Olympic hockey team - doesn't want anything to spoil the memory. If you are in that class, I'm good with it. And you'll be good with "They Said It Couldn't Be Done."

Be notified of new posts on this site via Twitter @WDX2BB.
Posted by Budd Bailey at 8:42 PM