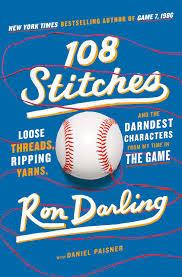 By Ron Darling with Daniel Paisner

What's the next best thing to having dinner with Ron Darling?

This is one of those books that's thankfully easy to describe, and easy to read. In a sentence, the former New York Mets pitcher and current broadcaster tells stories about his life in baseball.

This is book number three for Darling, who seems to take some delight in coming up with new twists to describe his life in the game. Last time, for example, he wrote "Game 7, 1986," as he told what it is like to come up short on a personal level in the biggest game of his life - the last game of the World Series - but see his team win the championship in spite of his efforts, and not because of them.

This is even simpler. Most of the new book is devoted to anecdotes about Darling's baseball connections. He started with a list of his teammates over the years, and he played long enough to have a bunch of them, and started jotting down notes. He works his way from A to Z during the course of this book, with some side trips to other personalities.

In other words, it flows like a normal conversation between two people - except only one person is doing the talking. And, let's face it - if you were having dinner with Ron Darling, wouldn't you want to shut up and let him talk?

There are all sorts of stories here, as he goes from the minors to the majors, and from one team to another. Some of them are funny, of course. But others are surprising. Take for example the tale of how Don Zimmer called him over to talk one time when Darling was in the Rangers' organization (pre-Mets), and told him to get a new baseball glove. Why? Zimmer could tell from the dugout when Darling was pitching that the hurler was about to throw a breaking ball through an opening in the back in the glove. In other words, he was tipping his pitches.

Then there's Frank Howard, manager of the Mets early in Darling's stay in New York. Howard, not a favorite of Darling's, apparently drove through an exact change lane in the mid-1980s and threw money in the old coin basket. And waited. And waited. When he was asked what he was waiting for, Howard said he put in a five-dollar bill and was waiting for his change.

While most baseball lifers have some good stories, it's a little surprising that Darling rarely holds much back here about people he doesn't like at other times. Former Buffalo Bisons' manager Jack Aker hardly spoke to Darling in the minors, leaving the young pitcher mystified. A teammate sprayed Darling one day with tobacco juice, even though it was Darling's first day in the majors and his uniform was nice and clean. Welcome to the Show, rookie. Darling's lack of personal respect for star slugger Frank Thomas leaked into their relationship during TBS broadcasts.

The one odd part comes at the end, when Darling goes off on a decent-sized rant about the state of baseball today. In particular, he's not happy with the how the game is played at times, particularly when it becomes a slave to analytics. That includes such topics as defensive shifts, five-inning starters, and the running game mostly taken out of the tool box. Darling makes some points, but it's a not what I was expecting.

I wouldn't pick this up for the young kiddies who might be fans of Darling's work on broadcasts. The language and a few of the exploits are R-rated. I also know that some people like the authenticity that profanity brings to a story, so they won't be offended.

"108 Stitches" (the number on a baseball, naturally) goes down very easily and quickly. It meets its goal for entertaining the reader ... even if you have to supply the dinner.