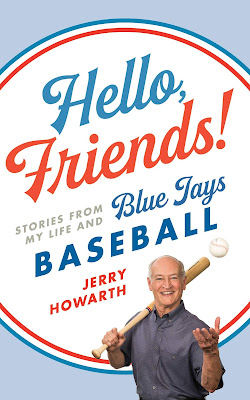 Jerry Howarth wasn't around for the start of the Toronto Blue Jays franchise in 1977, and he's not there now - retiring early in 2018. But he saw almost everything in between.

Howarth came aboard the organization as one of the team's broadcasters in 1982. That means he was around for almost every big moment in the team's history.

That history certainly is well covered in his book, "Hello, Friends!"  It looks back on those 36 years on the job in almost painstaking detail, at least in terms of the team and its players.

Tom Cheek was the first voice of the Blue Jays, and he was a smooth pro from Day One of the team's games in 1977. Howarth added another professional voice a few years after that. The latter grew up in the San Francisco area, and eventually deciding that something in the sports communication business would work for him. Sports writing was an option, but eventually he turned to broadcasting and stuck with it. Yes, he had to pay some dues - bouncing around a few cities on the minor-league baseball circuit and working on other sports' broadcasts as well as taking odd jobs (sales, community relations, etc.) to get by. It's a pretty typical story of a business that requires some skill and a little luck.

Finally, though, he got the call to move a couple of thousand miles to Toronto and away he went. The focus of the book changes at that point. Howarth gets out of the way in a sense, concentrating on his stories about the players, managers, etc. Each year gets a quick once-over, and the new players arriving each year are reviewed.

The Blue Jays won championships in 1992 and 1993, and made it to the playoffs a few other times. Those seasons get a little more coverage. Mostly, though, the years go by as the personalities come and go. Howarth comes across as optimist by nature, and almost everyone in the book comes across pretty well. That might be simply a case of personality. Good baseball announcers usually are the ones who wear well and get along with almost everyone. It's easy to see Howarth as a welcoming personality on radio (and to a limited extent, television) during a nice career. There are also stories about the players and their families, which are also pleasant.

In fact, only one person really comes off badly in the entire book. Howarth tells a couple of episodes of encounters with new Hall of Famer Mike Mussina. The pitcher comes off as rather surly. It's kind of nice to know that the old saying is true - you can't please everyone.

This all must sound like an easy, pleasant read for Blue Jays' fans at this point, and that's probably going to be true for some north of the border. Even so, it's easy to think that the book could have used a little editing.

The e-book version I have checks in at more than 400 pages of reading (at least according to the table of contents). It might have been a better book if it had lost some of those pages, and perhaps discarded some of the information on the seasons. It wouldn't have been that difficult; some of the players aren't that well known and/or don't have interesting background stories. There is some overlap of content too, as some information gets repeated. And it could have used some more words on the life of a broadcaster on a personal level. After all, it is Howarth's book.

Speaking of that, Howarth's retirement isn't even discussed here, which is odd. The story more or less ends at the end of 2016, although there are a couple of updates of a few people's lives. It's easy to wonder if this book's publication was delayed for a year for some reason.

Reading "Hello, Friends!" makes me believe that the fine announcer has another book in him down the road. This one is decent, though, and will fill the reader in on the people involved in the history of Canada's major league baseball team.

Be notified of new posts on this site via Twitter @WDX2BB.
Posted by Budd Bailey at 4:05 PM