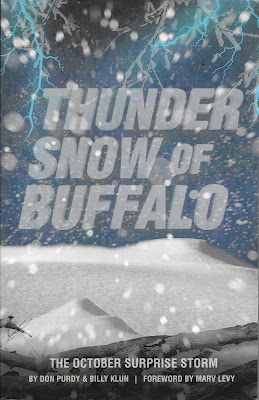 By Don Purdy and Billy Klum

Let's start with a personal story about the regionally famous snowstorm that hit the Buffalo area on October 12-13, 2006 - known in most places as "The October Surprise." That makes sense, since there are many such stories in the book, "Thunder Snow of Buffalo." Then we'll get to question number one, which is: What is a book on a snowstorm doing here?

I was working the night shift at The Buffalo News that night, and was aware that a lake effect storm had blossomed in certain parts of the region. I got out of work sometime after midnight, and took considerable time going home. I can still picture the trees bending over both sides of Parkside Avenue, thanks to the snow piling up on the leaves and branches.

When I finally got home, I pulled into my driveway ... and was greeted by the sight of the neighbor's tree, which had fallen across my driveway parallel to the road. In other words, I wasn't parking anything in my garage that night. I drove down the street, found a place that wasn't near a tree, and walked back home.

But before entering, I paused for a few minutes on my front lawn. Every few seconds, I could hear the crack of another tree breaking somewhere in the neighborhood. Think of popcorn near the end of the popping process. It was unforgettable.

All right, that's out of the way. This is reviewed in an area usually devoted to sports because co-author Don Purdy was working for the Buffalo Bills at the time. In fact, he spent 27 years there, including the Golden Era of four straight Super Bowls in the early 1990s. So it actually turned up on a list of new pro football books compiled by the Pro Football Researchers Association.

He and friend Billy Klum got together to work on a book about the entire experience ... as well as a few stories. But it's really the Bills' portion of the book that is of most interest here.

The football team was scheduled to go to Detroit for a road game, and Purdy - who does almost all of the writing here - was one of those faceless (to the public) guys who helped them get there. He also did such things as file workman's compensation claims when someone on the Bills' roster was hurt. Who knew? Let's just say that everyone concerned is busy when the team loses more than a couple of players on a given day. Purdy tells his own story about having a tree fall through his roof, the troubles in getting to work, etc. He also receives testimonials from others in the organization about their experiences, which are equally harrowing. The Bills managed to find some generators to get enough light to practice and keep the operation - or at least part of it.

The authors also talk to some others about the storm. The local weathermen get a chapter, as they discuss what happened to cause such a freak storm in the middle of fall. Purdy and Klun sum up the damage well enough, and devote a couple of chapters to the groups that helped the area get back to normal in terms of repairs. There also is a review as the efforts of a couple of nonprofits that tried to turn the whole event into something slightly positive, from the replacement of fallen trees to selling wood carvings.

That's the making of a good enough book, at least for those who lived through it all and might like a printed reminder of the experience. The catch comes with the fact that such a publication might run 200 or so pages, and this goes 300 pages. It certainly sounds like this was a project that was started, dropped for a while, and then resumed. It also was self-published.

So you might have guessed at this point that the book probably needed some professional editing, and you'd be right. There is a little too much detail and some repetition along the way that make this a little difficult to read after a while. More organization would have been nice, as well as a few fewer tangents and movie references.

Then there's the matter of Marv Levy, which is a little curious. The cover points out that Levy wrote the foreward. In reality, he sent Purdy a two-paragraph note that is a small part of the foreward. The former Bills coach also gets a 20-page chapter. No one deserves more respect than Marv, and the stories about him are fine, but they feel like they are from a different book.

Let's be fair about this. You have to give the authors a break or two when evaluating this. They obviously liked the idea of writing a book, and they come off as pleasant enough men who had a lot of fun doing so. And good for them.

"Thunder Snow of Buffalo" certainly will work well for family and friends, and others will relate to some of the storm stories told here. No one expects literature in this situation, but you'll at least get the idea about what that miserable storm was like.