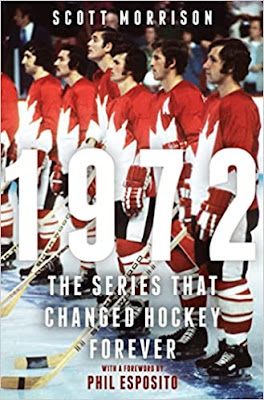 Authors don't often have the chance to take a second swing at a subject. It turns out that Scott Morrison is an exception.

Back in 1989, the Canadian sports writer wrote the book, "The Days Canada Stood Still." It was a look back at the famous 1972 hockey series between Canada and the Soviet Union, and it was a solid job of reporting and writing.

Now here we are in 2022, and much has changed. The year 1989 mostly is associated with the fall of the Iron Curtain. Shortly after that, the Soviet Union essentially went out of business. Since that time some of Russia's best hockey players have come over to North America to seek fame and fortune.

Since the 50th anniversary of the original series has arrived, more or less, it's not a bad time to revisit it. Morrison does that with "1972."

It might be difficult for Americans to understand how this series became a landmark in Canadian history - not just hockey history or sports history, but history. Canada always had taken a lot of pride in its hockey, believing that it produced the best players in the world.

But the Soviets after World War II slowly began building its hockey program and achieved great success. Eventually they started winning world championships and Olympic gold medals with regularity. How would they do against the Canadians? It was guesswork, since Canadian pros weren't allowed in "amateur" tournaments - even though the Soviet teams were drafted into the military and told to serve their country by playing hockey. Both sides had full-time players.

Finally, the two sides worked out a deal for a series in the fall of 1972. Some people in Canada - and a portion of that group consisted of some players and coaches - thought Team Canada would win eight straight games with ease. Imagine their surprise, then, when the Soviets came into the opener in Montreal ... and waxed the opposition, 7-3. It took some time for the Canadians to come together, become a team, and figure out a way to win. In hindsight, the dramatics of the series reaching amazing proportions, culminating with a big comeback in the decisive eighth game (four games were played in Canada, and four were in Moscow.) By the way, the author was allowed to skip school to watch Game Eight on television - a decision that continues to pay dividends to this day.

Morrison went back and interviewed the participants about their memories of the series. Naturally, he found Ken Dryden, one of the most articulate and thoughtful people ever to be a pro athlete. Others, such as Brad Park and Phil Esposito, display their emotions almost a half-century later. It's also good to hear the reaction of the Soviet players all these years later too. It turns out they aren't the robots we thought they might be at the time. Morrison even found a few Canadian fans who made the trip to Moscow for the four games; they have some stories that definitely are worth reading. Some other sources of information are mined too to good effect.

Both sides agree that the series changed hockey for the better. The bias against Eastern European hockey players went away quickly once they started arrived on this side of the ocean. The two styles of play merged in some ways as well. As Dryden said, it was one of the few times in life where the winner of a battle actually learned something from the loser. Hockey players now have more speed and skill than ever before, and it's a much better game to play and watch than it was 50 years ago.

The Toronto-based Morrison has been part of the hockey media for decades, and there are few in the business who have earned more respect over the years. Most of the book is devoted to the events of the series itself, as it probably should be. That might be a problem for a few on this side of the border, who either might know the basics of the series and don't need to go further, or aren't interesting in something that qualifies as "ancient history."

But in Canada, you probably can't write enough about this particular matchup, because people can't read enough about it. Its American equivalent might be the US-USSR hockey game in Lake Placid in 1980, but that understates it greatly. "1972" will stand up nicely as a good recap of this fabled series and its place in Canadian sports history.

Be notified of new books on this site via Twitter @WDX2BB.