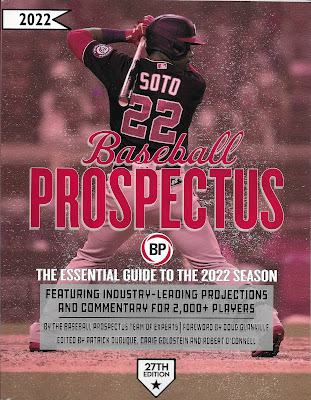 It can be easy to produce the biggest annual book regarding an upcoming baseball season every year. You'd think at Year 27 they'd get used to the twists and turns. But no, the people at Baseball Prospectus had another slightly bad break this time.

Last year the editors and writers had to deal with the effects of a pandemic and a shortened season. For a group that tries to chart year to year progress and then make some conclusions about players, this was tough to swallow. Plenty of players are hot for two months, but it's tougher to do for six. So thoughts were a little on the incomplete side.

Baseball went back to something resembling normal in 2021, at least in terms of a 162-game schedule. However, work in the baseball industry came to a screeching halt back in December, when the owners locked out the players. It took until March to reach a collective bargaining agreement, and the book already had been out for a couple of weeks.

Therefore, this book has to be considered a little less complete than in most seasons. There is a good-sized section at the end of profiles of free agents who hadn't signed contracts yet. Usually, that's not much of a problem. Then there are the team essays, which can't take advantage of the signings. For example, Carlos Correa is going to be a big part of the story of the Twins' season in 2022. But you'd wouldn't know that here. As they used to say in Brooklyn, wait until next year.

With that out of the way, the book is back and in good form once again. Here's the annual description: Baseball Prospectus' staff takes a look at just about anyone who matters in the baseball business, from recent draft choices to veteran stars. They use a variety of advanced metrics in that analysis, which can be a little scary if you aren't used to them. But eventually they get the point across about how they see a particular player progressing. The writers know their stuff; several have gone on to good jobs with individual teams.

Disclaimer: I mostly read the descriptions of fairly established players and top prospects. If I need to learn about someone else or have forgotten the particulars, well, it's on the bookshelf waiting for me. A couple of things jumped out at me in going through this edition.

First off, there sure are a lot of relief pitchers in major league baseball. Every team seems to have a bunchy on the roster, and a few more stashed in the minors. The problem is that it is a tough job to do effectively and consistently. You can have a good game, a good week, a good month, or a good year, but everything can change overnight. Just ask Matt Barnes, the Red Sox closer who was in the All-Star Game but wasn't on the Boston roster for a playoff series. It's a tough business.

The players essays occasionally have been quite snarky and funny over the years here. The amount of it seems to come and go depending on who might be doing the writing in a given year. The number is down a bit this time for no apparent reason. The conclusions, though, seem on target. Meanwhile, the team essays are done in a variety of approaches. This year's collection ranked particularly well.

No, I wouldn't buy this for my fantasy league draft in all probability - not that I'm in one. But it's a useful tool for those who like the idea of following baseball on a deeper level than most.