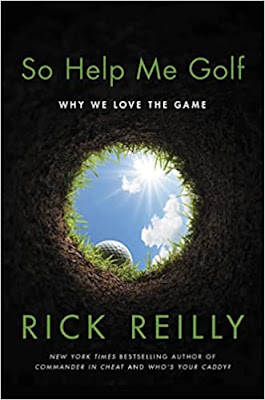 There's always an argument brewing when the subject of "America's best sportswriter" comes up. There are plenty of names that could be tossed around.

Such a list narrows when the phrase becomes "America's funniest sportswriter." There aren't many people who can make sports funny on a consistent basis. The gold standard was Jim Murray, the Los Angeles Times columnist who was downright beloved by those who read him.

Murray has passed on, so the title has been passed down. Perhaps the person closest to that style and approach is Rick Reilly. He is best known for writing a column on the back page of Sports Illustrated, in the day when SI was a weekly and was much more influential than it is now. Reilly's work usually brought forth a laugh or six, but he could stir other emotions as well. The good ones do that, you know.

Reilly moved over to ESPN to do some work for its magazine and television networks. The broadcast work always seemed a little out of character. He retired from ESPN in 2014. Reilly has written a few books since then, and "So Help Me Golf" is the latest one.

This is essentially a collection of stories about the game of golf as Reilly has seen it over the years. Since he's not been producing content on a regular basis, it would be easy to guess that some of the stories might be reprints of previous work. However, that would be wrong. While there may be some updating going on, it's all fresh material and up to date.

The lengths of the stories vary greatly. The longest is an essay where he describes playing the best 18 holes in the world by number - in other words, the best No. 1, the best No. 2, best No. 3, etc. Reilly has been collecting those stories for more than 30 years, and some of the descriptions sure sound like they could use a accompanying photo. But they give the author to use some funny phrases and analogies, so it still works pretty well.

Mostly, though, these are essays that are more or less column length. What it's like to play golf with Bill Clinton and Dan Quayle. What Phil Mickelson said about Tiger Woods when they were finally on the same team. The man who faced a $600,000 bet. Golf in strange places, like a German POW camp. "The Red Shoe Bandit." The woman with Down syndrome who earned a golf scholarship. America's busiest golfer. And so on.

Golf isn't the only thread that runs through the book. Reilly gets personal in reviewing the relationship with his father, an alcoholic who made life rather miserable for his family over the years. It's a personal story and interesting in a much different way than the rest of the book. There's a semi-happy ending to that thread, which probably is the best that any of us can expect in such situation.

Humor writing is a rather subjective area, and I assume this applies to Reilly. However, most people who read his material come away with at least a smile. The exception probably is his book, "Commander in Cheat," which outlined Donald Trump's shenanigans when it came to the game of golf. That certainly drew some hate mail, probably along the lines of this review on Amazon.com: "I would not use the pages from this book to wipe dog crap off the sidewalk."

Reilly is on safer territory here. "So Help Me Golf" is a quick, easy enough effort that can be read in less than a day. It ought to work as a gift for just about anyone likes golf and who likes to laugh.

(Be notified of new posts on this site via Twitter @WDX2BB.)