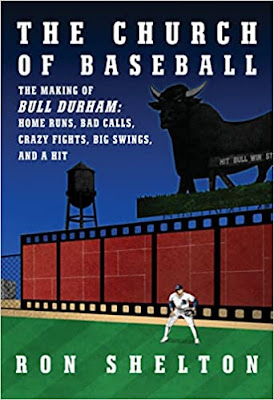 The 1980s were a good period for movies that used baseball as an important part of the story. "The Natural," "Field of Dreams," "Major League" and "Eight Men Out" come to mind immediately.

Then there's "Bull Durham." Writer Will Leitch once wrote a column for MLB.com that called this 1988 effort the best baseball movie ever made. That's quite a call, especially since there is not a heck of a lot of actual baseball in the movie and no Hollywood ending with a big win by the home team.

Leitch puts it this way: "The conversations on the mound. The tricks for getting out of a slump. The managerial motivational tactics. Which hand to swing with in a fight. "Bull Durham" is a movie that understands the romance and madness of baseball better than any movie ever has, and it has an all-timer cast. The only thing better than watching this movie is watching an actual baseball game. And only barely."

The romantic triangle in the center of the film drives things along, and perhaps that convinced some women who aren't necessarily baseball fans to buy into the concept. In any event, the film did quite well in the United States upon release, and is fondly remembered by many - some of whom can recite this bit of dialogue to this day and thus understand the title.

"I believe in the Church of Baseball. I’ve tried all the major religions and most of the minor ones. ... But bad trades are part of baseball - now who can forget Frank Robinson for Milt Pappas, for God's sake? It's a long season and you gotta trust it. I've tried 'em all, I really have, and the only church that truly feeds the soul, day in, day out, is the Church of Baseball.”

The driving force behind "Bull Durham" is Ron Shelton, a former minor-league infielder (he even played in Rochester, which offered a bobblehead in his honor at one point) who, as they say, wrote what he knew. At one point years later, Shelton met a couple that loved "Bull Durham," to the point where their sons are named Crash and Nuke. The writer/director immediately thought he needed to write a book about the experiences that went into the movie.

That book is "The Church of Baseball." It certainly comes through as a breezy look back at how everything came together to form what for many is a memorable movie.

It opens with the story of the script. Creation stories are always interesting, and it's great fun to follow along and find out how the story evolved. That includes the little things, like the name Crash Davis. Shelton looked through a record book to find a classic baseball name, and saw that a fellow named Crash Davis was a player in the 1940s. When production started, Shelton received a call from someone claiming to be the real Crash, who wanted to talk to him. The real Mr. Davis turned out to be a charmer who was satisfied about the use of his name once he found out that the character won over the girl in the end. Shelton even used him as Wahoo Sam Crawford in a later movie, "Cobb."

Shelton had some scripts to his credit at that point, but he wanted to direct it himself. That led to the usual battles with Hollywood studios on what to do and how to do it. Shelton managed to figure out how to get the movie financed while maintaining control of the product. One of the reasons why it came together was that actor Kevin Costner, who was just breaking into stardom, was set to star. The other pieces fell into place, more or less. Movie-making is a lot like sausage-making, in that the process can be a little tough to stomach but the end result can be worth it.

Shelton had a few more fights with executives along the way, making a few sacrifices in the process. The movie didn't test too well with audiences initially, causing some degree of panic with all concerned. But there's a happy ending, considering how well the film has held up.

Speaking of endings, Shelton did have an idea for a sequel. He fast-forwarded more than 10 years in that proposal. Crash is a minor-league manager who is one step from the majors. He had split with Annie, as the toll of the minor league life was a heavy one. Nuke was an aging pitcher who was forced to use a knuckleball to keep his career going. And they all meet back in Durham. Sounds interesting - too bad it was never developed.

Quite obviously, your interest in the book will depend on your interest in the movie. If you've never seen "Bull Durham," well, the bookstores are full of other titles. If this book sounds interesting, then find a DVD copy of the movie and see what the fuss is. But if you enjoyed the film to the point that you can quote lines like "Candlesticks make great wedding gifts ... Let's get two" to similar-minded friends, then this is a must read.

I'm in the latter category, so "The Church of Baseball" is like sitting down with Shelton and have a long conversation about how the movie came about. The book rarely gets bogged down in the mechanics of filmmaking, and is mostly good fun. Therefore, it's definitely worth your time if you fit that description.