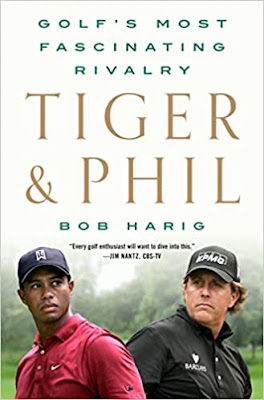 We love our rivalries in sports. The concept probably started in the 19th century, when the team in my town challenged the team from the town next door. Since then we've seen Yankees-Red Sox, Duke-North Carolina, and Celtics-Lakers - among many others.

The same principle exists in individual sports, but sometimes it's a slightly more difficult fit. For example, tennis has had plenty of good rivalries over the years - perhaps because the best players often play each other for championships. There's no better example of that than Chris Evert and Martina Navratilova. Lately we've had the three-cornered rivalry of Roger Federer, Rafael Nadal and Novak Djokovic.

Golf is a little trickier. The nature of the game makes individual rivalries a little more difficult, since there is a thin margin for error between a champion and a fifth-place finisher. Head-to-head confrontations between "rivals" are quite unusual.

Golf's best rivalry might have been Arnold Palmer and Jack Nicklaus. Palmer was on top of the sport in the early 1960s, with his personal charisma dragging fans along with him for the sometimes unusual ride. Nicklaus came along in that era, and knocked Palmer ("The King") off his throne. The rivalry turned one-sided pretty quickly, as Nicklaus because by most standards the greatest player of all time - at least in terms of a career. Palmer was merely the most popular player ever. As has been said, what made their relationship interesting is that one many had what the other wanted. While both men were fierce competitors, eventually they seemed to realize that what united them was much stronger that what divided them.

That brings us to something of the equivalent of Arnie and Jack. It's the title of Bob Harig's book, "Tiger and Phil."

Phil is Phil Mickelson, who won a professional tournament as a amateur and seemed immediately destined for greatness. He had a swashbuckling style that proved popular with the fans, and he never saw a sheet of paper or photo that he couldn't autograph. Then came Tiger Woods, who immediately showed that he was going to be a great player - it was just a question of how great. The answer soon became obvious - very great. Draw the line from Arnie to Phil and from Jack to Tiger, and you get the idea.

At his peak in a particular year, Tiger probably was the greatest player in history. You knew he was better than you, and he knew he was better. Just when we got done thinking that the growth of golf had led to the formation of so many great players that it would be difficult to dominate, Tiger took that theory and threw it in the trash. His winning percentage was simply unbelievable.

Woods went past Mickelson into a class by himself. But Tiger had plenty of bumps on the road, some due to injuries and a few others through self-inflicted wounds. And Phil, who was forced to up his game in other to try to stay close, capitalized to the tune of six major championships over the years. So he won the on the PGA Tour for about 50 years, and no one - not even Woods - does that.

Harig is a veteran writer for SI.com who has written about golf for other sources as well. He has done a bunch of interviews with Woods and Mickelson over the years, although they didn't do interviews for this book specifically. However, the author did talk to a variety of people about the two men, their careers, and their relationship.

The resulting book is professional and thorough, and offers some insight into the relationship of the two golfers. Is it fascinating? Maybe not. While there are some interesting anecdotes that are new which come up along the way, this is a rather standard recap of the golf careers of the two men. I would think those who have been paying attention along the way are familiar with the story. So 368 pages seems a bit long.

"Tiger & Phil" certainly will work for those who wish to relive some of the great golf moments in the past 25 years, starting with Woods' first Masters win in 1997 and ending with Mickelson's dramatic victory in the PGA championship in 2021. It won't be boring for those golf fans who don't fit into that sweet spot. But it's not a must-read, either.