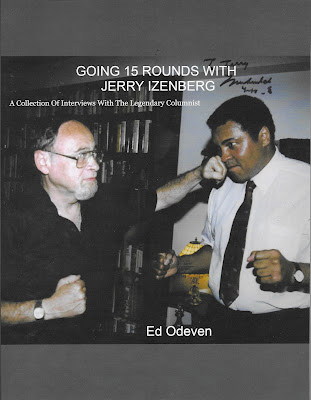 "Going 15 Rounds with Jerry Izenberg" is something of a love letter to one of the nation's top and most durable sports newspaper columnists.

Jerry Izenberg has been writing and reporting for the Newark Star-Ledger since 1951. That's a long time to do anything, let alone well. Before that, he was part of the legendary sports staff of the New York Herald-Tribute. It's assumed he's the last surviving member of that group that includes Red Smith and was founded by Stanley Woodward, who essentially invented the modern sports section.

Year after year, Izenberg has been pounding out the columns - although he cut back when he was in his 80s. He's always been considered smart and literate. If Jerry is famous for anything, it's that he probably was one of the first sports writers who wasn't afraid to take on the intersections of sports and society. He was an early champion of Muhammad Ali's right to fight and have his own beliefs, for example. Izenberg had long streaks of covering such events as the Super Bowl (more than 50), Triple Crown horse races, etc.

Perhaps his biggest problem in terms of a national following was his stage. The Newark Star-Ledger doesn't offer much of a spotlight in such terms. That's close to New York, but not quite Broadway if you get the picture. Izenberg did do some other projects, such as essays on a television show, books, a few documentaries, etc. But, the guys across the Hudson were the ones that received the most acclaim. That's not necessarily fair, but it is reality. There is something noble about doing what you love in the same place for that long.

Ed Odeven grew up in New Jersey, and no doubt read Izenberg at that point. He's now a sportswriter based in Tokyo, but decided to put together his own tribute to the veteran scribe. Odeven put together a book that splits more or less into two parts. The opening section is edited to read as 15 different chapters, symbolizing the 15 rounds of boxing that used to constitute a championship distance for a fight. (It's now 12.) Those chapters certainly are the highlight of the book. Izenberg has accumulated bunches and bunches of stories over the years, as you'd expect, and most of them are charming. They are the type of stories that you can't wait to share with others. There are also tales about what influenced his writing style and his work, which are also quite interesting.

The second half of the book doesn't quite work as well. Odeven tracked down some of Izenberg's peers and colleagues for comments on the veteran's career. Good idea, but the problem is that some of them don't really know Izenberg that well. They generally have the same sort of general viewpoints - fine writer, more influential than popular as these things go, etc. One footnote - one of those interviewed is Gene Kershner, my former coworker at The Buffalo News, my former newspaper. Gene has covered horse racing as a stringer for several years now, and has dealt with Jerry a few times.

Now ... you should know going in that this was a self-published book. That means some compromises have to be made in the production process. This is an 8.5x11-inch book, and there are no columns on each page for whatever reason. That makes it thin and a little difficult to read as the eyes move all the way across the page. Odeven told an interviewer that it was 55,000 words, so it's too bad a smaller format couldn't have been used. Self-published books also have more errors than their professionally done counterparts, such as grammar, spelling and layout. There's some of that here.

But the most obvious problem is that Izenberg's columns are only briefly quoted a few times. That's a problem when there's a book filled with praise about someone's writing ability. It makes the reader curious to find out what all the fuss is about, but it's not present. It's perfectly understandable as to why there are no examples of his work included; reprinting such stories get into rights fees and legal documents. But one of the great rules of journalism, and maybe all of life, is "show me, don't tell me."

"Going 15 Rounds with Jerry Izenberg" is enjoyable enough to warrant a look, especially if you are familiar with Jerry's work. If it inspires people to seek out Jerry's books or find some of his columns elsewhere, then Odeven has succeeded in his goal.