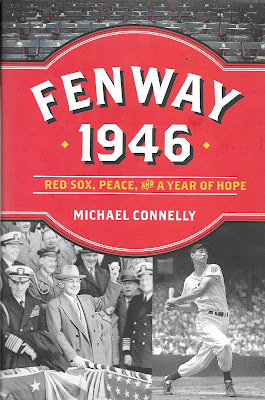 There's never been a baseball season quite like the one in 1946.

After almost 40 years of stability and growth, major league baseball faced some difficult challenges that year. World War II had erupted at the end of 1941. While the games continued, many of the ballplayers left their teams to join the armed services for the duration. That meant they were out of uniform, baseball version, through the end of 1945.

When those players returned to work for their respective teams, there were question marks everywhere. Some players never made it home, of course. A portion of those who did brought physical injuries back with them, threatening their careers. Others had mental wounds.

Then there's the factor of age and the layoff. The older players - say, in their mid-to-late 30s - didn't know if they could regain their skills after as many as four seasons away from the games. The younger players had missed development time that they might not receive again.

Throw in the fact that such problems weren't equally distributed on each team's roster, and there was a situation where just about no one knew what might happen during the 1946 season. What did happen was that the Boston Red Sox fielded one of the best teams in their history. It's profiled in "Fenway 1946" by Michael Connelly.

It takes the author a little time to get to 1946, which is a good idea. After a brief review of Red Sox history before WWII, Connolly jumps right into the War Years. There are stories about how individual players were dealing with the situation. For example, superstar Ted Williams didn't join the service right away because he was the sole financial supporter of his money. Criticism fell on him like a shower just before a rain delay, and he eventually signed up.

Then there was the matter of baseball and race. Late in 1945, the Brooklyn Dodgers signed African American Jackie Robinson to a contract, which changed everything in that area. The Red Sox had passed on the opportunity to sign Robinson and other top black players earlier, something which in hindsight certainly would have changed American history - not to mention the fate of the Red Sox.

After covering all of that in the first third or so of the book, we move on to the 1946 season. The Red Sox came out of the gate like absolute monsters, dominating the American League virtually from the start. No one could stay close to them, and they had a relatively easy time cruising to the pennant. It was on to the team's first World Series since 1918, causing something of a civic celebration in Boston. The book's final 80 pages or so are devoted to the  the championship matchup with the St. Louis Cardinals; it only takes a glance at a record book to realize what happened there. It was a memorable series with a thrilling/heart-breaking finish.

No one can say that Connelly didn't put in the necessary work on this. He writes that he read the Boston Globe newspaper from cover to cover in its 1946 editions. Connelly's eyes must be bleary from microfilm study. Several other sources, including books, newspapers, and websites, are mentioned too.

This is a good start, and Connelly chooses to take an anecdotal approach to the book. There is a great deal of information here that is of interest - in part because it's not often covered in baseball books. For example, housing shortages were a huge problem for American immediately after World War II. Teams had to advertise in the newspaper to find homes for their players in 1946. There's an absolutely amazing story here about how the World Series played a role in the death of Field Marshall Hermann Goring, who was awaiting execution in Germany when he took poison and committed suicide.

Connelly also makes Williams the star of the story, and wisely so. What a fascinating character he must have been at that point. The image of him kicking his glove in anger from the dugout to left field after a bad moment at the plate is a vivid one.

On the other hand, more background information along the way would have been very helpful. In particular, the 1946 season is covered quite quickly. There's not much sense of the big picture here.  Some of the judgments - such as comments about team spirit, etc. - feel like they are straight out of the Forties and don't offer much of an historical perspective.

One more edit might have been good too. Some names get a little botched along the way, just as Joe/John Dobson and Roger/Rogers Hornsby. A few items get repeated along the way as well.

"Fenway 1946" certainly will supply some information that even the biggest Red Sox fan probably doesn't know, especially 75 years after the fact. Still, it's easy to wish that it wouldn't have taken too much to make it even better.