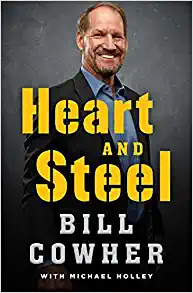 By Bill Cowher with Michael Holley

At the end of the author's note that starts his autobiography, Bill Cowher writes, "All in all, I coached the Steelers for 261 games. Fifteen years in the public eye. I did a reasonable job of keeping my private life, well, private. Until now."

If that sounds like a bombshell warning, forget it. It's fair to say there aren't any skeletons in the closet of the former Pittsburgh Steelers football coach. "Heart and Steel" is a straight-forward story of a straight-forward person who kept his eye on the ball most of the time. Football and family were what mattered most to him, and that's the Cowher that comes across here.

If you aren't from the Pittsburgh area, you might not know Cowher's back story. He grew up in Crafton outside of Pittsburgh, and played football like every one person in that region at least wanted to do. Bill was good enough to earn a trip to North Carolina State, where - like in high school - he tended to exceed expectations on how good he would become. It was the same in the pros. Cowher wasn't drafted, and didn't even make the team in his first crack at the NFL. But he didn't give up, and eventually played six years at the game's highest level  mostly on special teams. If you didn't know about him then, you weren't alone.

Cowher may not have been ready to retire after the 1984 season, but he was offered a coaching job with the Cleveland Browns and decided it was in his best long-term interests to take it. That started a relatively short apprenticeship, as these things go, and in 1992 he landed the job of his dreams - head coach of the Pittsburgh Steelers. It's almost hard to express what it must have meant for someone who grew up in Western Pennsylvania to actually drive to work at the Steelers' stadium each day.

Cowher still has all the notebooks he kept from his many years as the Steelers' head coach, and he refers to them frequently in the stories of the teams he coached. There is some insight into some of the players who passed through Pittsburgh, but few horror stories. Maybe that's not surprising considering the success the team had. Cowher concentrates more of his attention on the coaching business - preparation, motivation, key decisions, memorable moments, etc. If some of that sounds like a business book on leadership, well, you've got the idea. During that time in Pittsburgh, when he was the region's favorite son, he did his best to lead as normal a life as possible under the circumstances. Cowher used time with his wife Kaye (a former N.C. State basketball player) an his three daughters to get back to reality, as least as much as he could do so.

The results speak for themselves. Cowher made the playoffs in his first six seasons, one of two NFL coaches to do so. His career record was 149-90-1, and he won the Super Bowl in 2005. Cowher gives a sense here that after that championship he had a case of "now what?" His family had moved to Raleigh after the Super Bowl, and he retired after one more season.

"What's next?' turned out to be work in the media with CBS, which left his life in better balance. Cowher's plans for the rest of his life, though, took an unexpected u-turn. The most poignant part of the book deals with the illness of Kaye, who became ill and died in a somewhat shockingly amount of time. But he's rebounded as well as possible, eventually finding another wife and staying with CBS on football broadcasts.

The book goes by easily enough. There are a few stories about some of the players and coaches that were encountered along the way that are entertaining. But mostly, this is a story about a man who watched most of his dreams come true, and is rather grateful about it.

It's hard to say that "Heart and Steel" is going to be compelling to anyone who doesn't have an interest in football. But for those who want the background on a golden era of Steeler football as told by the smart, rational man who put that era together, this ought to work. Pittsburgh, you will enjoy it.