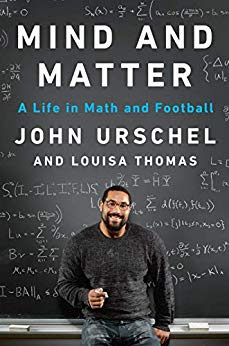 By John Urschel and Louisa Thomas

At some point, most adults will say that a level of mathematics sent them screaming into the night. It might be algebra, it might be trigonometry, or (in my case) it might be calculus. Once you get past the point where math becomes less useful in what we might call everyday life, it's easy to move on to other subjects.

John Urschel still hasn't reached that point. As a result, he probably qualifies as one of the most interesting and unusual personalities to come down the road in sports in some time.

That's what makes his book, "Mind and Matter" so different. He can talk about differential equations and run blocking with a very advanced level of knowledge. That's a combination that is tough on stereotypes, particularly when the fact that Urschel is African-American is added to the mix. So the phrase "good for him" applies on so many levels. Rulebreakers are always worth knowing.

Urschel spent most of his formative years, including high school, in the Buffalo area. He was always large for his size among fellow students, although perhaps a little undersized by the standards of future professional football linemen. That made him a natural to at least give football a chance, so he took it up and eventually became a prospect for colleges.

Along the way, Urschel discovered that he loved the "puzzles" that high mathematics could offer him. In fact, while barely into high school, he audited a course at the University at Buffalo in math and more than held his own. The young man saw, and sees, no contradiction between working on math and practicing and playing football. In fact, one was something of a break from the other. The book ping-pongs between his experiences in those disciplines. That can turn into something of a cliche, but the authors - he and Louisa Thomas are married - make it work quite nicely here.

It sounds a little like the proverbial "shaggy dog" story, but Urschel received one of the last available scholarships at Penn State for football. He wasn't considered a top prospect, but eventually worked his way into the starting lineup. In the meantime, Urschel also became a star in the classroom, maintaining a 4.0 GPA while working his way up the mathematics ladder in rapid succession. This is not an easy combination. Most football players have to take a reduced workload because of the time demands on their sport, and need tutors to get through it. Not only did Urschel do that and then some, but he seemed to be rather well accepted by the rest of the team. Football usually is not the place for non-conformists, but Urschel apparently pulled it off.

One of the most interesting parts of the story is that the Nittany Lion players was around when the scandal involving assistant coach Jerry Sandusky went public. The NCAA eventually came down heavily on the Penn State program. Urschel didn't understand why he and his teammates were penalized for actions that took place before he arrived on campus, but had to put up with as the university saw a new coaching staff put in place and several teammates transfer to other schools.

Urschel was good enough to be drafted by the Baltimore Ravens, and spent three years there. He even started 13 games. This took place while he continued to pursue high education in mathematics along the way - again, no easy task. But Urschel knew that eventually he'd have to choose one or the other - advanced mathematics is a young man's game too - and a concussion might have pushed that timetable up a bit. He became a full-time mathematician in 2017. He's currently a doctoral candidate in MIT.

One warning is necessary when talking to potential readers of this book: There is some complicated mathematics involved at times. Urschel goes out of his way not to get bogged down in it as he explains it from a distance, and handles it as well as it can be done. But this is a man who wrote an article called "On the Characterization and Uniqueness of Centroidal Voronoi Tessellations." Speaking as a reader who immediately became nervous when seeing the word "polynomial" in the text, this may drive you away for small sections of the book.

"Mind and Matter" feels like something of a swan song for Urschel. He's saying farewell to his "two-sided" days when football and math competed for attention. The only publishing he'll be doing down the road is when he does something interesting in mathematics - which no doubt will be often. Therefore, Urschel's look behind the door of what he was thinking along the way until he reached this point a couple of years ago is well explained and always interesting.

I'm not sure who might follow in Urschel's footsteps some day. But there's no doubt he's a heck of a role model for any who cares to look in an unconventional place for one.

Be notified of new posts via Twitter @WDX2BB.
Posted by Budd Bailey at 2:51 PM