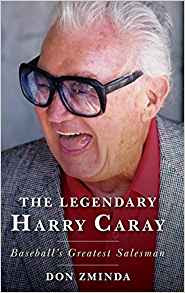 It's been more than 20 years since Harry Caray died while still serving as the Chicago Cubs' main broadcaster after a long, long career in the business.

I suppose the best reaction to that is "Holy cow!"

Caray still seems a bit larger than life today, a figure that will put a smile on a face and prompt a bushel of stories from those who knew or listened to him.

Sometimes "larger than life" is another way of saying "exaggerated." Some of the stories surrounding Caray indeed have grown beyond the edge of the truth, while others have been confirmed to help fill out the legendary status.

Don Zminda took on the project of sorting it all out in his book, "The Legendary Harry Caray." He does a good job of setting the record straight.

Zminda is well qualified for the task. He's written a dozen books on baseball over the years, and he's been a well-known member of the Society of American Baseball Research for decades. Oh, and he's a Chicago native, so Zminda knows something about Carey and the teams he broadcast.

A look at the bare bones description of Carey's life would reveal that he spent 25 years as the announcer for the St. Louis Cardinals, achieving regional fame in the day through the team's vast network of radio stations. Then it was on to Chicago, where he spent 11 years with the White Sox and 16 with the Cubs.

That's quite a broadcasting career, but it sort of misses the point with Harry. He always seemed to be walking on a tightrope during a broadcast. Carey wanted his teams to win, but when they failed to meet his expectations the announcer wasn't above criticizing all those involved. In other words, a fan was behind the microphone - and all that implied. That sometimes led to dust-ups with management and team members, but it also led to a close association with fans - who thought like he did. As the sports business has grown, it has become more conservative - and that means that loose cannons like Caray have become less appreciated to everyone but fans.

Oddly, Caray might be best remembered not for any particular moment of broadcasting, but rather a song: "Take Me Out to the Ball Game." Bill Veeck, another legendary character who owned the White Sox during part of Caray's tenure, said that he always wanted an announcer to lead the singing of "Take Me Out to the Ball Game" during the seventh-inning stretch. Finding a personality who could pull that off, though, was difficult. Veeck found his man in Caray, who carried the gimmick from the South Side of Chicago to the North Side when he switched teams. The sing-a-long still takes place at Wrigley Field today, either through guest singers or a video of Harry.

Carey also was a man who knew how to have a party. Come to think of it, his appearance using prompted one. Carey's consumption of alcohol over the years was enormous, to the point where no one could keep up with him after games. It's quite surprising that he made it into his 80s, even if some of the stories about such postgame frivolity could be slightly exaggerated.

Zminda takes an objective look at some of the incidents that marked Carey's career - the disagreements with the bosses, the ups and downs with the players, the feuds with other broadcasters. Sometimes announcers turn out to be the face of a sports franchise, and a few bumps in the road are to be expected. Even so, there's a reason Carey has a statue just outside Wrigley Field.

This book arrives with only a couple of complaints. A few points are repeated along the way, so one more edit might have been nice. The story also doesn't carry a great deal of fun along the way, leaning toward the dry side. There are other places for that; Steve Stone's book ("Where's Harry?") about working with Caray is a good example of that. But Harry was, at the base, a fun person to hear. I missed that part of the story in this biography.

"The Legendary Harry Carey" certainly accomplishes its goal well of separating fact from fiction. My guess is that longtime listeners ought to enjoy the way Zminda connects the dots.

Be notified of new posts on this site via Twitter @WDX2BB.
Posted by Budd Bailey at 10:08 AM