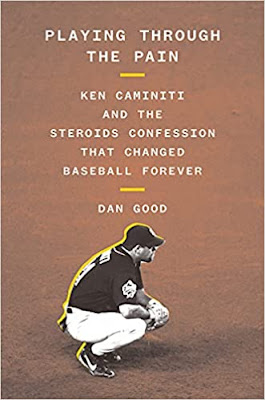 Author Dan Good spent 10 years trying to figure out the puzzle that was Ken Caminiti's life. That sort of dedication shows up on every page of the book, "Playing Through the Pain."

Good talked to almost 400 people in an attempt to tell the story of the late baseball All-Star. He started doing research on Caminiti in 2012, perhaps not knowing what he was in for. Now the book is finished, and the first reaction has to be complete respect to the author for putting in the time and trying to find the full story.

On one level, Caminiti had a relatively typical baseball life for a major leaguer - at least from a distance. He was a star athlete in high school, drafted by the Houston Astros, worked his way up the ladder and reached the majors in 1987. Ken spent a few years there before he was traded to San Diego, where he became an All-Star and the Most Valuable Player in the National League in 1996. Caminiti played hard, and at his best played well.

But Caminiti had an accompanying story, one that basically is the reason for writing the book. Ken was sexually abused as a child, and it's certainly difficult to know what sort of psychological damage that caused in the years to come. In high school, Caminiti was pounding alcoholic beverages pretty hard. It wasn't long before drugs became a problem for him as well.

In Houston, he was a good regular third baseman and nothing more. Caminiti's body took a pounding through baseball in that era, but he do anything he could to get back on the field. Ken also was known as a generous teammate, who went out of his way to help young players on his team. But when he arrived in San Diego in 1995, his stats suddenly took an upturn. Ken hit more than 20 home runs for four straight seasons, capped by the MVP season in 1996 of .326 batting average, 40 homers and 130 runs batted in. Caminiti had four great years in San Diego before bouncing around a few teams at the end of his career.

But substance abuse still followed him, and steroids had been added to the mix along the way - which might explain something about that statistical bump in San Diego. He received a great deal of publicity in 2002 when he was the subject of a Sports Illustrated article in which he detailed his steroid use. One memorable line from that story was: "I’ve made a ton of mistakes. I don’t think using steroids is one of them.”  Caminiti was about the first to go public with his steroid use during his playing days, which turned into a much bigger public service than he probably realized. He died of a drug overdose in 2004.

The amount and type of information presented here are rather dazzling. For example, Good convinced Caminiti's trainer/steroid supplier to go public on how everything worked. Practically everyone from teammates and coaches to high school friends are willing to talk about Ken. If there's one almost universal feeling that winds through the comments, it's that they liked Caminiti but always wondered what was going on beneath the surface.

The book has a few aspects to it that are going to be considered mild drawbacks to some. There are several books out there by sports figures with addiction problems. None of them would be called a light, fun read. This is no exception. There's also a great deal of material presented, and it's easy to wonder if a little trimming might have made the presentation a little better ... or at least easier to digest.

Good also shows a great deal of sympathy toward Caminiti along the way. His problems are by no means overlooked, but the author comes off occasionally as quite anxious to show off the baseball player's good points. Caminiti certainly caused a lot of pain for his family and friends along the way. It's a tough balancing act to show the good and the bad in any life; maybe this needed to be pushed just a little more to the bad from an editorial point of view.

"Playing Through the Pain" certainly provides enough context on the unusual career of Caminiti to put it all into better perspective. That makes the book a solid success. And for those who followed his career closely - that's you in Houston and San Diego - this will provide some necessary and very appreciated details about what went right and what went wrong.

Labels: Review: Playing Through the Pain (2022)