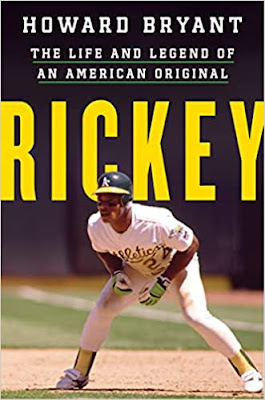 With Rickey Henderson, the stories always start before the facts.

Here's one that didn't make the book: A sportswriter asked Henderson for an interview, and Rickey asked where she was from. She said she worked for the Bee newspaper chain - the Sacramento Bee, the Modesto Bee, the Stockton Bee, whatever.

Rickey was said to have responded, "Man, the Bee be everywhere."

Henderson may have actually said that. Then again, maybe not. The point is that it's hard to separate truth from fiction when it comes to Rickey, and that's why this biography of the baseball great is so valuable ... and why the subtitle - "The Life and Legend of an American Original" was right on target.

Howard Bryant went deep into the subject of Henderson's life to figure out what really happened. The resulting book, "Rickey," brings clarity to the life of someone who can use it at least in the public relations sense. However, the actions speak louder than those words - or atleast they should.

Rickey was part of the Great Migration of the 20th century that brought millions of African Americans out of the South. Quite a few settled in Oakland, California. In the early going of the book, it was almost easy to trip out over someone who would become a public figure down the road. For example, an Oakland high school once had a baseball outfield of Frank Robinson, Curt Flood and Vada Pinson. Other made substantial contributions to black cultural life in other ways.

Henderson wasn't part of that original wave of athletes. But when he reached high school, he was beyond a sensation. It's hard to imagine just how good someone with his athletic skills must have been in football. Who at that level could even tackle him? But Rickey ended up in baseball right out of high school. He started in the Oakland Athletics farm system, and it took him a relatively short period of time to move up the ladder - maybe longer than Rickey would have liked. In that first year, Rickey carried along a little secret. He was essentially illiterate, teaching himself how to read in his first years as a pro. A great athlete tended to get pushed along, so Henderson didn't feel a great deal of academic pressure - especially one with reading issues.

Rickey eventually reached the majors, and led the league in stolen bases in his first full seasons - including a preposterous 130 in 1982. Henderson was rewarded with good contracts, but his requests for better ones were rejected. The knock was along the lines, "Yeah, he gets on base and steal bases, but he doesn't show much power." So the Athletics traded him to the Yankees, where Rickey started turning up the power (24 and 28 homers in his first two years) but still doing all the things that made him the best leadoff man in the league.

The reaction was rather stunning, at least from the New York media. It downplayed his achievements; the stories quoted in the book almost seem laughable. In hindsight that seems rather shocking. Bryant makes a case that racism was involved. Some of that might have come from "leaks" of information from the team. Bryant points out that it was somewhat rare at the time for African American Yankees (that phrase reads oddly in hindsight) of that era to be embraced by the team and the players. Somehow, Dave Winfield wasn't a true Yankee, even if his biggest offense was outsmarting team management in contract negotiations.

And Rickey also went his own way whenever possible. You wouldn't expect someone of his background to be particularly good at media interviews, and he wasn't. Contrast that to the leader of team across town, Gary Carter of the Mets, who never met a microphone he didn't like. And Henderson was not one of those guys who took the field game after game, no matter what. If he wasn't close to 100 percent, he took a maintainance day. Rickey only played more than 150 games in a season twice (both in New York). For a guy whose legs took a pounding with all of those stolen bases, that seems like a good idea in hindsight.

Rickey eventually went back to Oakland, where he was happier and just as good - winning an MVP trophy in 1990 as a big part of the great teams in that era. After a few more years with the Athletics, he bounced from team to team. In a third stop in Oakland in 1998, he had 66 stolen bases ... at the age of 39. Who does that? Heck, who breaks a career record in an established sports at the end of 31, as Rickey did in steals.

Bryant makes a very good case that if Rickey was truly dogging it on the field, he wouldn't have played until he was 44. And he wouldn't be the all-time leader in runs and stolen bases. Perhaps all of those stories about him were a way of humanizing him, since there wasn't much wrong with the way he played baseball. Henderson always was rather driven to become an immortal, keeping an eye on his financial situation as he went. When he made it to Cooperstown, he received a little help beforehand and then delivered an acceptance speech that hit a perfect tone. Rickey didn't even have any of his characteristic references to himself in the third person.

Practically every article on Rickey's legacy contains a quote from baseball analyst Bill James - if you cut Henderson in half, you'd have two Hall of Famers. Yup, he was that good - the most disruptive giure on the basepaths since ... who? Ty Cobb? Maybe, maybe not. Maybe ever.

Bryant performs the public service of putting the image of Henderson as a caricature somewhat to rest with "Rickey."  The stories about him may not be all true - the author knocks down a few of them along the way - but the achievements remain.