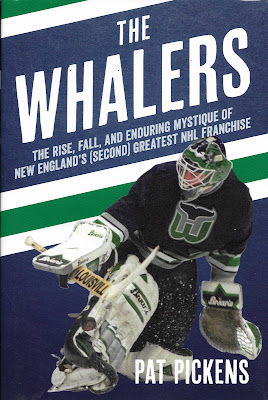 Ah, the Hartford Whalers. Or, as they were once called by Boston Globe hockey writer Kevin Dupont, "The Forever .500 Whalers."

The Whalers were around for about a quarter of a century. The franchise started in Boston with the World Hockey Association in 1972. The New England Whalers won the title that season, although few noticed because most people in that city were more concerned with watching Bobby Orr and the Boston Bruins. That win turned out to be the high point of the franchise, at least in terms of winning.

The Whalers soon moved to Hartford, and made it until the end of the WHA's existence ... no small accomplishment. They also were admitted to the National Hockey League in 1979 - the only American team to be so invited.

It was Connecticut's one shot at professional sports glory. No wonder the sports fans still remember the Whalers fonder. And no wonder hockey writer Pat Pickens picked that team for a book about its history - called, for obvious reasons, "The Whalers."

Once the Whalers joined the Big Boys of the NHL, they more or less settled into a pattern. They were usually a little below the breakeven mark, qualifying for the Stanley Cup playoffs eight times in 18 years with only three winning seasons along the way. Part of the problem, particularly after the early years of the 1980s, was that Hartford was stuck in a really good division. Boston and Montreal were very good year after year, and Buffalo and Quebec were often more than competitive. When the first two rounds of the playoffs were against divisional rivals, there wasn't much room for the Whalers to win. Their only playoff series win came in 1986, when they swept the Nordiques but lost to the Canadiens in Game Seven of the next round - in overtime, no less. If Hartford had scored the OT goal that night, maybe the course of the franchise is altered.

Eventually, though, the Whalers returned to mediocrity. That was followed by some bad trades and poor financing, and the vultures started circling. The team moved to Raleigh, NC, in 1997 - another area with no other pro sports competition but with a population large enough and rich enough to support a pro team. The Carolina Hurricanes haven't been that much of an improvement over the Whalers overall, but they have done better in the playoffs - even claiming a Stanley Cup.

Author Pat Pickens covers what bases need to be covered here. He tracked down many of the important figures in team history, from owners through players to media members. Pickens even talked to some fans, who still are buying Whalers' merchandise when they get the chance. They also can hum the one thing that will always be associated with the team - its fight song. Anyone who was around the franchise in those years, even as a visiting player or media member, can come up with the tune from "Brass Bonanza." Some members of the organization hated it, but none can deny its long-lasting appeal from a 2022 perspective.

This is told in a rather straight-forward way for the most part. The players seem to concentrate in their comments on how much they liked playing for and in Hartford. Many apparently come back regularly, and certainly get the hero's treatment when they return. There aren't many surprises and funny moments along the way here, and perhaps a few more would have been nice. Naturally, a few more wins along the way might have helped the dramatic elements a bit, but that was out of the author's control.

But Pickens first and foremost wanted to tell the Whalers' story in a clear manner, and he's has done that. For those of you who can still recite the team's power-play units all these years later or have their hearts skip a beat over the first notes of "Brass Bonanza," they are sure to enjoy this.