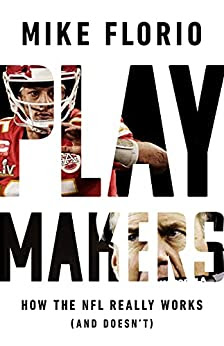 Mike Florio has some opinions about the state of the National Football League, and he'd like to share them.

No, that's not right. That statement doesn't go far enough.

Mike Florio has a lot of opinions about the state of the National Football League, and he'd like to share them.

That's the premise for his book, "Playmakers." It is sort of named after the ESPN's fictional series that was an attempt to show some of the underside of football. That plan went over rather badly with the National Football League, who just happened to be one of a broadcasting partner of ESPN. The show died a relatively sudden death.

The difference is that this version of "Playmakers" is real. It's written by Florio, who is the point man of the website of Pro Football Talk (if you prefer, ProFootballTalk.com). It is done in association with NBC Sports. If you've ever seen a Sunday night broadcast, you might notice that PFT ranks every starter in the league by position ... and puts the rankings under a photo of those starters as they are quickly introduce at the start of the game.

Florio started his work life as a lawyer but moved into sports reporting. He held a job with ESPN before jumping to this venture. The question became - how could he turn the information he's collection and the opinions he's gathered into a coherent book?

It must have started with a list. Florio came up with 10 different sections of the book: the drank, free agency, quarterbacks, coaches, owners, health and safety, off-field player misconduct, major scandals, officiating, and the future. So far, so good. Then he listed at least 10 topics under each category. For example, the quarterbacks mentioned including everyone from Johnny Unitas to Tim Tebow. Each essay doesn't get a great deal of space, so think of them as quick snacks rather than large meals. It keeps the size down to a manageable 288 pages or so, based on prepublication information.

The good news is that Florio does a good job with this. It's not easy to come up with great information or opinions on this many items. For the most part, though, he comes up with some interesting, fresh thoughts that can carry the reader along. In some cases, it's a chance to revisit some old news items, while in others it's an opportunity to discuss news items of the present and possible ramifications of the future.

Is it all interesting? All is a big word. Some of the stories about player misconduct and scandals don't work overly well, at least from my viewpoint. It's more of a case of recapping a story without a whole lot of analysis. Implied in the question at the beginning of the paragraph are the words "to me." Anyone who reads a book like this is going to be a big fan of the sport. This is not the place for impassive passengers. Therefore, everything should get a spark of recognition from the contents when a book like this comes out.

And the size helps too. If something isn't too interesting to you, well, it doesn't last long. Another subject will come up along, just like the next bus. It might work better. The usual way of praising such work is along the lines of "it's good to bring into the bathroom." That's a little crude but true.

"Playmakers" comes off as a casual discussion with someone who spends his life around football and is happy to chat in an informal way. That makes it good fun without being life-changing. It should have little trouble luring in readers who will find the book worth their time.