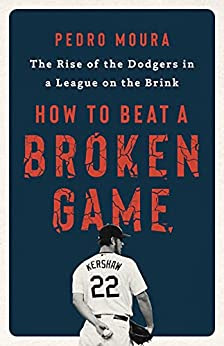 Something has gone wrong in baseball in the past few years.

The symptoms are quite obvious. Games take too long to play, and there's less ball-in-play action than there has ever been. Too often baseball becomes tied up in home runs, strikeouts and walks - the so-called "Three True Outcomes" that don't require fielders.

Millions of people are still watching major league games in one form or another, and that means millions of dollars can ride on a single pitch in the proper circumstance. But the warning signs of trouble are there, and baseball is looking at some ideas to put the game itself back in balance.

In the meantime, teams are devoting a large percentage of resources into trying to play the current game "better" in order to win. Exhibit A might be the Los Angeles Dodgers, who really leave no proverbial stone unturned in their quest for success.

Pedro Moura, a national writer for Fox Sports and former Dodgers' beat writer for The Athletic, decided to take a long look at what's going on with baseball through the eyes of the Dodgers. The result is "How to Beat a Broken Game."

After a brief introduction outlining the situation, Moura gets to work with a series of chapters that would work if they were self-contained. So we get to meet such players as Mookie Betts, Trea Turner, Walker Buehler, and Clayton Kershaw - success stories all in a variety of ways. Andrew Friedman comes up a lot too. He's the head of baseball operations of the Dodgers. Friedman managed to put together a winning team on a shoestring in Tampa Bay, and his reward was to go to work armed with the Dodgers' deep pockets. Dave Roberts gets a chapter, and you'd expect the manager to be picked. The reader learns about some obscure people too - at least by a fan's standards.

There's plenty of information in here that is relatively fresh and interesting. Kershaw, for example, had to figure out how to change his pitching mechanics in midstream, in part because his slider no longer looked like a fastball when thrown and batters had learned to capitalize. Max Muncy went from journeyman to feared power hitter almost overnight, completing a difficult transformation that probably left everyone surprised if pleased. Roberts talks about how his communication skills - something he places great importance on - failed at a key time during a pitching change in the World Series. Then there's the story about how the Dodgers value versatility in their roster. Not only does that mean they usually aren't short-handed if injuries come, but it also depresses statistical totals of the players a bit because they aren't in the lineup every day. That in turn saves them millions at contract time, and probably keeps the entire roster happier if a little on edge.

On the other hand, the world of baseball today is a complicated place, and sometimes it just isn't that interesting. There are some stories about players who use outside coaching when necessary, and who study the latest analytics to make improvements. You've probably seen the numbers on spin rates from pitchers and launch angles from hitters during television broadcasts. The figures are helpful, I guess, in helping players survive and thrive because of the way the game is played, but reading about some of it is rather tough sledding.

The Dodgers clearly are putting a lot of time, effort and money to explore every possible avenue toward success. They have won at least 90 games in every season but one since 2013. The exception was 2020, when Los Angeles was 43-17 in the Covid-shortened 60-game season. That was the year the Dodgers won the World Series. But LA also had won eight straight division titles before that streak was snapped in 2021. Still, the Dodgers are always in the hunt for a championship, and that's all you can ask of a franchise and its staff.

There's an audience for "How to Beat a Broken Game." Those who consume knowledge about baseball no doubt will soak a lot of it up. But I'm a big fan, and my eyes started to skip over some of the technical parts along the way. I'm sure I won't be alone in that, so consider that a warning while thinking about a purchase.