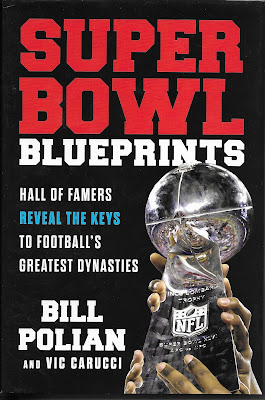 By Bill Polian and Vic Carucci

Oh, to be Bill Polian and Vic Carucci as they were compiling this book.

They came up with the idea of doing an oral history of some of the best teams in the National Football League over the last few decades. Then they actually talked to the people that made it possible about what happened in those glory years and why - at considerable length.

It doesn't get much better than that. At its best moments, "Super Bowl Blueprints" is an absolutely fascinating look back into the past.

The coaches probably are the stars of the show, and they are well represented here. We hear from Bill Parcells, Tony Dungy, Marv Levy, Mike Holmgren, Tom Flores, Jimmy Johnson and several others. But the Hall of Fame's player section isn't left out either, what with Peyton Manning, Steve Young, Terry Bradshaw, Jim Kelly, Joe Greene and Troy Aikman coming up. That's a pretty good starting point for discussions.

We've lost a few of the key people from those teams, of course. Al Davis and Bill Walsh have died, but they are well represented. The Raiders have plenty of good stories about what Al was like, and Walsh left behind an interview and a book. Walsh might be the most interesting character in the book, simply because he was so willing to explore every possible avenue - include some that were made up on the fly - in his pursuit of excellence. As most know, Walsh's rate of success was quite good.

The subject matter is rather wide-ranging, which is great to read. Sure there are stories about big games and important moments. But there are plenty of insights into the behavior of individuals and teams as a group, as well as some good laughs to be had. One of them ends the Bills' chapter, with the story of a chance meeting between Marv Levy and Leon Lett.

Are there any complaints to be had? A few minor ones. There are certain fans from the northeastern part of the country who looked over the list of great teams in the Super Bowl era and said, "Ahem. Aren't we missing someone like the Patriots?" Yes, they aren't on the list. I would guess that Bill Belichick and Tom Brady are not interested in doing this type of interview at the moment, so that may have excused them from the project. Not much the authors could do about that.

A couple of other issues come up too. The players and coaches can't help but use football jargon to describe moments and plays. It's a little easy to get lost in that stuff, at least if you approach football literature with even the slightest bit of casual interest. It also could be argued that some of the chapters feel as if they could be trimmed a little - particularly the 74-page chapter on the West Coast offense teams (San Francisco and Green Bay). On the other hand, the Raiders' and Bills' sections check in at around 35 pages - and feel a little short. It's a tough balancing act.

Not to worry. "Super Bowl Blueprints" succeeds on the goal that it set out to do - listen on on how the great teams of the past few decades got that way. If football is your passion, then the book is worth your time ... and then some.

Learn more about this book from Amazon.com. (As an Amazon affiliate, I earn from qualified purchases).