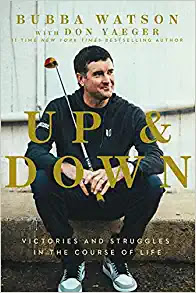 By Bubba Watson with Don Yaeger

"Up & Down" gives us the chance to talk about the curious case (and accompanying autobiography) of golfer Bubba Watson.

Here's someone who is almost tailor-made for a good book about his life. Watson came out of Bagdad, Florida (near Pensacola), and was something of a junior sensation. He won local tournaments even though he never had a lesson, and figured out a way to pick up a college scholarship although he admits he wasn't exactly a great student. Bubba eventually landed at the University of Georgia, where he was really good at times but still was demoted to sixth-man status - which is kind of like being the sixth man on a basketball team.

Still, he turned professional and had a little success. Even so, that didn't prepare anyone for his win in the 2012 Masters. What's more, he proved the victory was no fluke by capturing the 2014 Masters. They were popular wins in some ways. That's partly because Watson wore his emotions on his sleeve, and partly because he was the classic bomber who clobbered the ball whenever it was necessary - and it usually was.

On the other hand, Watson seemed always to be carrying some baggage around. A 2015 ESPN survey of PGA pros voted Bubba as the person least likely to be rescued by their peers if they saw a fellow pro get in a fight. He's gotten into some public squabbles with those around him in golf. And his career is a bit of a puzzle, in that he seemed capable of doing more on the pro tour than he actually did. At this writing, Watson is 43 - and probably is past his prime.

In other words, Bubba seems like someone who was particularly ill-equipped to handle the spotlight that comes with being a star in American sports. Finding out what happened to him probably is the reason for giving "Up & Down" a read.

Indeed, autobiographies in which the central character is on the unpleasant side can be tough to read, and it's easy to see that Bubba's actions could make him unpopular. For example, he had a very public argument with his caddie on the course during a tournament that everyone seemed to notice. Watson writes about something of an intervention from Ben Crane, a fellow pro who essentially told him to change his behavior. But Bubba didn't quite turn things around at that point.

Watson starts the book with a candid admission - one that has received most of the headlines from reviews and news stories - about how he hit bottom in 2017. His weight was down to about 162 (down 30 pounds from normal), and his head was such a mess that he thought about giving up golf. We're hearing more these days about athletes who have coping with the pressures of the job, and it's good that Bubba has come out as a member of that club. Watson opened up to people close to him, starting with his wife, and got his head back in order. That's worth more than a golf clap. He's also done a ton of charity work, becoming something of the PGA's face when it comes to adopted (he and his wife adopted two children).

The biggest puzzle of the book, though, comes at the end. There isn't a great deal written about what happened to him. That starts on a personal level. It would have been nice to know if he did manage to change his ways a bit, and some examples of what he did.

Then there's the golf side of that story. On the plus side, he made the Ryder Cup team in 2018. After devoting a chapter to service as a vice-captain when he was passed over for the 2016 American team, you'd think that might have been worth noting. On the minus side, Watson hasn't been particularly effective on the tour over the past few years. He hasn't won any events since 2018, and he's only been in one top 10 in a major championship - with 10 missed cuts - starting in 2015. I don't know if he's had physical problems in that time, but it would be interesting to know what if anything has gone wrong. Sometimes this book reads as if it was written around 2018.

There's also very little written about most of the other players on the tour. OK, it's his story, but Watson seemed quite self-absorbed in talking about his tournament years. There is a bit on how he became to be a frequent practice partner of Tiger Woods early in his career., and not much else. A little insight into others might have been nice. The book might have used one more edit, to take out a couple of redundant stories.

Watson has said his priorities in life are God, family, friends and golf - in that order, and I guess the book is something of a reflection of that. I'm not qualified to judge anything about his faith, but he does appear to be a devoted family man and a giving person toward others. Even so, the person revealed in "Up & Down" remains something of an enigma at the end of this very quick read.