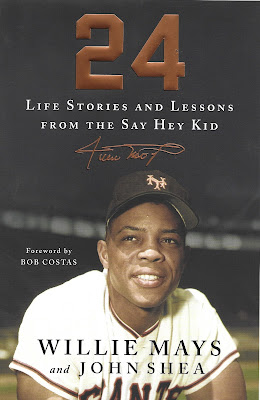 By Willie Mays and John Shea

My favorite quote about baseball legend Willie Mays comes from, of all people, actress Tallulah Bankhead, Apparently around 1962, she said something like “There have only been two geniuses in the world – Willie Mays and Willie Shakespeare.”

Shakespeare still has his fans, a few hundred years after his prime, of course. But just about everyone loved Willie Mays during his baseball career and during his life in retirement.

Mays was more or less than the best all-around player in the history of baseball. He cranked out great seasons like he was a copying machine, year after year after year. If the phrase “five-tool player” (someone who could hit, hit for power, field, run and throw) wasn’t created for him, it certainly applied to his tool box of talents. What’s more, he played baseball with a mixture of joy and showmanship so that no one could look away.

More importantly, he made his debut in major league baseball with the New York Giants in 1951. Willie played in the Negro Leagues for a while, but then crossed that barrier to play with baseball’s best. Once Mays had gotten some experience at that level and served time in the military, he was ready to take centerstage. When he did that, he wouldn’t leave it for close to 20 years. Everybody loved him so much that it was hard to make any sort of argument that the majors were no place for a black man. If anything, it was the other way around – Willie deserved to play in an even better league.

Mays hasn’t played since 1973, so the number of people who remember him in his prime are growing fewer. At 64, I remember Willie as a veteran star by the time I began to pay close attention to baseball in the Sixties. So anyone too much younger than I am probably doesn’t remember much about Willie the player, at least in terms of first-hand information.

There have been some good biographies of Mays. James Hirsch’s book, “Willie Mays,” certainly qualifies. The book “24,” by Mays with John Shea, isn’t an autobiography in strict terms. Still it serves a couple of functions. For those who remember Mays on the field, it will bring some good memories of the way he patrolled center field for the Giants for about two decades. For those who don’t, the book serves as an educational tool as to why he is remembered so fondly today.

Shea did most of the heavy lifting on this book . The San Francisco baseball writer found out that Mays wanted to do something that kids could use for inspiration. I guess the chapter headings could serve that purpose. They are given such titles as “Honor Your Mentors,” “Have Fun on the Job,” and “Strive for Excellence.” But it would be an exaggeration to say that this belongs in the self-help section of the bookstore.

Shea gets good-sized points for not taking the easy way out here. He tracked down all sorts of people to get them to talk about Mays. That includes Presidents of the United States (Clinton and Bush), Negro League teammates, Giants and Mets teammates, opposing players, and current stars. It’s quite the All-Star lineup, and apparently almost all of the material is fresh. Even Barry Bonds is happy to say nice things at length about his “godfather.”

Each chapter focuses in on a certain aspect of Mays’ career. Shea provides some perspective, Willie adds some quotes, and Shea takes it from there with background information and other interviews. Perhaps the best sections are the ones where Mays does the most talking – he gets to do that a lot in the section on his status as a five-tool player, and that might be my favorite part of the book. As for the "genius" description, it seems that Willie tried to notice everything on the field - to the point where he'd move the other fielders around depending on the situation. In addition, he never seemed to forget anything that happened in a game. Perspiration really joins with inspiration to make a genius.

Now, to be fair, this book was written to make Willie look good. There’s nothing in here that reflects badly on Mays, not a word that tarnishes that good image. The problem is that some stories get repeated quite a bit, and the praise piles up. Sometimes that can be a little, well, tiring … as in, we get the point.

But a book by and about Willie Mays is review-proof. People interested enough in the subject at this point will love it from page one. I might as well criticize chocolate ice cream or Santa Claus. Willie deserves all the praise he gets here. Needless to say, those who still appreciate what he did on and off the field will love “24.”