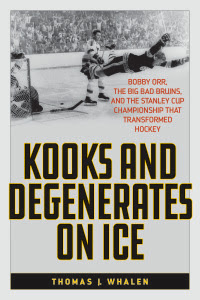 It's been a half-century as of 2020 since Bobby Orr did a Superman impression for the Boston Bruins, flying through the air just after scoring the Stanley Cup-winning goal in the final against the St. Louis Blues (pictured here). It was voted the greatest moment in NHL history a short time ago, and it probably hasn't been topped.

What's more, if you'll excuse the personal side of the picture, it's the team that turned me into a hockey fan. I had always been a Celtics fan from a distance of a few hundred miles as a kid, thanks to family ties, but knew nothing about hockey except from seeing the odd game on television out of New York. This crew pulled me in, and I'm still watching the game today.

The Boston Bruins of 1969-70 stole quite a few hearts and minds that year. Orr was the centerpiece of the team, but Phil Esposito was a superstar as well and the supporting cast had a ton of excellent players who knew how to fill their roles. Personality? Check. Toughness? Check. In a different era, that team probably would have won at least four Stanley Cups instead of the two it did capture (1970 and 1972). Circumstances didn't allow the group to stay together and fulfill its potential.

Author Thomas L. Whalen thought it was a good time to give those Bruins the once over. The resulting book is "Kooks and Degenerates on Ice," a line from a quote from backup goalie Eddie Johnston.

The Bruins had been the needy baby brother of the league for a good portion of the 1960s. Then Orr arrived as an 18-year-old sensation, and the Bruins completed one of the most one-sided trades in NHL history in picking up Esposito, Ken Hodge and Fred Stanfield. The other pieces came together soon enough, and the team needed to learn how to win in 1968-69 before preparing for takeoff a year later.

Whalen takes a mostly biographical approach to the task of looking back at that team. The regular season itself really gets little coverage here, with the stories of the key players reviewed. Then the book gets to the playoffs, which didn't offer too many dramatics. The Bruins won their last 10 games in racing through the Rangers, Blackhawks and Blues to the Cup.

Boston had enough to win again in 1972, but a number of forces combined to bring the Bruins back to the pack. The World Hockey Association came along and raided the team's roster for such players as Derek Sanderson, Gerry Cheevers and John McKenzie. Orr started to have severe knee problems a few years into his career, and after a while simply couldn't compensate for his injuries.

Whalen certainly did some serious homework for this project. The bibliography is a long one, with a variety of sources from books, magazines and newspapers cited. It's tough to argue with what's been written. Still, it's a relatively short book, and there's not much here that you'd call fresh information considering the $36 price tag.

Part of the problem is that this team hasn't been exactly ignored by hockey writers over the years. Esposito and Orr have written books on their hockey lives; Esposito in particular set records for honesty on his less-than-straight-and-narrow ways in his autobiography. Others such as Sanderson have done the same. If you had an interest in the subject, you probably have scratched that itch by now.

The book also wanders to cover the rest of the world's activities, such as the shootings at Kent State, the breakup of the Beatles, and Senator Ted Kennedy's driving accident.  That doesn't include short biographies of opposing players like Bobby Hull, Stan Mikita, Brad Park, Jacques Plante, Tony Esposito and Glenn Hall. The Bruins' history also gets covered here. Eddie Shore's career gets quite a bit of unexpected coverage. It's not that the information is incorrect or boring; it just seems like padding to the main story about the Bruins.

It's probably worth noting that in the Kindle version I read, there were references to Wayne Gretsky and Gordy Howe. Let's hope the names were corrected for the printed version; they are correctly spelled in the index.

"Kooks and Degenerates on Ice" won't take you much time to read, at least, and it will provide an overview if you need a concise look at the subject of the 1969-70 Bruins. If you are looking for more than that, though - such as interviews with some of the principals as they look back for 50 years - you are liable to be disappointed.