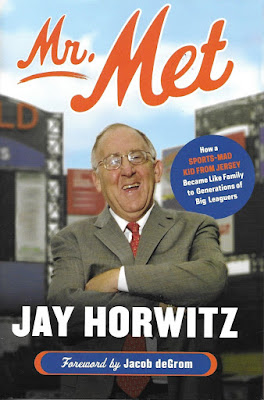 We've been lucky enough to receive the SNY feed of New York Mets broadcasts for the past several years. Some of the baseball hasn't been too good in that time, so announcers Gary Cohen, Ron Darling and Keith Hernandez often have spent air time singing the praises of Jay Horwitz, a member of the team's public relations department for almost 40 years and now in charge of alumni relations.

Horwitz has seen a great deal of Mets history, and he's managed to get along with everyone in his job and put a smiles on faces almost every step of the way. To do that with the New York media moves him into Presidential Medal of Freedom territory.

Since that honor probably isn't forthcoming (I think), an autobiography might be the next best thing. Thus, we have "Mr. Met" - a breezy and upbeat look back at the life of one of baseball's good guys.

Horwitz didn't start out life as someone who spend so much time in athletics. He was born blind with one eye but still loved the games. So, he did what he had to do. After college, Horwitz found work with some New York City area colleges as a sports information director. There he had a talent for finding stories that attracted the attention of the media, which is no small task when you are at Fairleigh Dickinson University. Horwitz passed along stories on everyone from a college hockey player in his 40s who doubled as a priest, and a world-class high jumper who was quite short.

From there, it was on to the Mets' job - as he got hired after knocking a large container of orange juice into the lap of general manager Frank Cashen. From there, we're off on a tour of Mets history over four decades. The big seasons (World Series trips) and special events (9/11) get plenty of coverage, as do some of his favorite personalities - like John Franco and David Wright. The author probably spends the most time reviewing the time spent by the various managers used by the Mets over the years. Heck, Horwitz even has plenty of nice things to say about Art Howe, whose tenure in New York wasn't exactly memorable or successful.

That sort of tone more or less runs through the book. There are no scores settled here. Horwitz only makes fun of himself during the 250 or so pages. Several Mets figures apparently supplied quotes for the book, and all of them are quick to praise Horwitz' work over the years. That feels sort of funny to read in an autobiography, and I'm not sure it's all necessary.

The book also quotes several newspaper stories about a particular time and place, occasionally but not always including references to Horwitz. Again, this feels a little like padding. Why not hear about it from the point of view of the author?

"Mr. Met" is obviously written by a devoted Mets fan with a target audience of devoted Mets fans. If you fit into that demographic, the book will be a pleasant read for you - and you'll understand why Horwitz is a beloved figure in Mets lore. Just don't expect any inside stories about what happened during difficult situations in team history from someone who still bleeds orange and blue.

Be notified of new posts on this site on Twitter @WDX2BB.
Posted by Budd Bailey at 12:04 PM