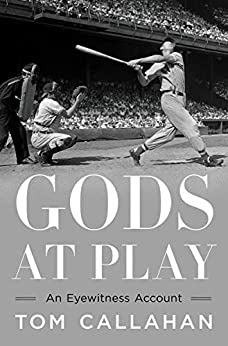 You hear the phrase "I couldn't put it down" when it comes to books. That's more rare than you'd think. Even the good ones call for a break by the reader every once in a while.

Sometimes, though, a book comes along that hits the reader's sweet spot - a book that you enjoy from beginning to end, and are a little sorry that it has ended.

For me, at least, "Gods at Play" by Tom Callahan was such a book.

Callahan bumped into sports journalism almost by accident, as he impressed a sports editor with a bit of knowledge about an incoming Bullets' player named Earl Monroe. Callahan worked up the ladder from there, serving as a newspaper reporter and columnist and serving as Time magazine's sports writer.  He's done a few good books along the way, too.

Those jobs gave him a lot of access to sports stars over the years, particularly in the early days when the players and coaches weren't kept at an arm's length from the media whenever possible. Here he is now, 50 years, telling stories about what the ride was like.

What's more, all of the stories are good ones.

Admittedly, I'm a sucker for tales of sportswriters on the road. They usually center on the adventures of some bright, interesting people who wrote nonfiction for a living - except, of course, when it came to their expense accounts. I should add that memoirs like these from sportswriters used to have a bunch of tales that involved alcohol consumption that haven't gotten less funny as time as gone on and drinking has become a little less, um, glamorous. Thankfully. In this case, Callahan opens the entire book with a story about John Drebinger of the New York Times - and it's a classic. The book had me right there.

From there, we're off on a journey with some of the greats of the business. Kareem Abdul-Jabbar. Oscar Robertson. Roberto Clemente. Pete Rose. Johnny Bench. Muhammad Ali. Paul Brown. Bill Walsh. Arthur Ashe. Tiger Woods. Secretariat. Joe Montana. Wayne Gretzky. Larry Bird. Mike Tyson. If you are going to write about the biggest sports starts of the second half of the 20th century, that's not a bad way to start. The B List of those included here has some good names too. They are grouped mostly by sports, although tangents are allowed in such exercises.

There are a few excerpts of his work included here, but Callahan only includes one long complete story of his. It's a terrific story about Jerry Smith, a tight end of the Washington Redskins who died of AIDS in 1986, and about how his teammates felt about him. Wonderful work. The chapter on basketball player Bob Cousy fascinates as well; he's still a good, thoughtful man into his 90s.

Admittedly, some of the names and stories might qualify as ancient history to those who are still waiting to have their first adult beverage in an establishment. But I think everything holds up well enough to still be current and enjoyable today.

Callahan really did have quite a ride in the business, as "Gods at Play" shows. Not everyone will love it like I did, but most will enjoy it thoroughly.

Be notified of new posts on this site via Twitter @WDX2BB.
Posted by Budd Bailey at 1:05 PM