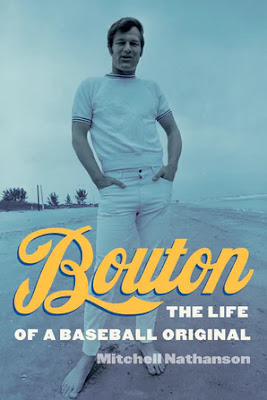 
The stories from those who were baseball fans around a particular age in the fall of 1970 are remarkably similar. They were usually boys in high school or close to entering it. Their parents came around and asked what they wanted for Christmas or their birthday, and the answer came back, “I’d like a baseball book.”

And that’s how a certain generation came to acquire “Ball Four” – Jim Bouton’s diary of the 1969 baseball season. Their parents didn’t know what was inside of those covers, but their kids did. The youngsters learned about drug use and Peeping Toms and office politics and the joys and frustrations of playing the game. Every assumption we used to have about the baseball life was essentially blown up, page by page.

What’s more, Bouton was the perfect man to perform the demolition – someone at the right place in the right time. Not only was he an outsider – someone who didn’t quite fit in with the rest of the group – but he was also smart and funny. “Ball Four” was frequently hilarious. It holds up today quite well on a number of levels.

Those kids, who are now on the verge of retirement, probably are a big part of the target audience of “Bouton,” a biography by Mitchell Nathanson. They will enjoy this thoroughly.

It’s always interesting to read stories about how baseball players were scouted and “recruited” in the days before the amateur draft began in 1965. Bouton was not a sensation in high school, but was persistent and worked his way toward prospect status. After spending a little time in college, he signed with the New York Yankees – who, in that era, more or less had their pick of players because everyone wanted to play with a perennial champion. Bouton surprised everyone by moving into the Yankees’ starting rotation.

Bouton was a 21-game winner in 1963 and pitched in the World Series, but he was already starting to feel pain when he threw. Oh oh. He scratched out one more good season in 1964, and then he and the Yankees, by coincidence, both disintegrated. Bouton hung around the Yankees organization for a few years without success, and his career was clearly going nowhere.

However, along the way, Bouton made friends with some of the sports writers covering the Yankees in that era – the ones that had noticed what was going on in the Sixties and had stopped writing the same old stories that had been part of sports journalism for a few decades. Bouton was the perfect subject for them – smart, funny, accessible, and aware.

You can see the roots of “Ball Four” taking shape here, and that section might be the most interesting part of the book. Bouton teamed up with Leonard Shecter, and decided to work on a diary of Bouton’s baseball year. Everything fell into place for the project. Bouton started the season with the first-year Seattle Pilots, a collection of has-beens and never-will-bes, and ended it with the Houston Astros, who were on the fringes of the pennant race. Bouton wrote down notes on what he saw, and read those thoughts into a tape recorder – and shipped everything to Shecter, who turned it into a book.

You may have heard what happened from there. The Baseball Establishment reacted with absolute horror, which did nothing but increase sales to those who wondered what all the fuss was about. A classic was born, and something of a folk hero was created.

The story wanders a bit from there, if only because Bouton’s life did the same. He’d get an idea in his head, and it would be hard to dislodge it until it was played out. The pitcher did return to the majors for a short time with Atlanta in 1978, when others would have given up on that dream long ago. Bouton went into sportscasting in New York City, where his free-spirited approach of ignoring the usual rules in the field helped pave the way for the revolution in that industry. Some business ventures didn’t work, some of them – like “Big League Chew’ bubble gum – were a fabulous success. Bouton always something new was just over the horizon.

Nathanson talked to many people who provide perspective on Bouton’s life … or, in a sense, lives. The families, including both of Bouton’s wives, are quite forthcoming about how everything happened. Professional associates also had plenty to say about him. Even when they didn’t particularly like what Bouton did, they agree that he certainly ranked as one of the most memorable characters in his life.

It’s hard to think that anyone who hasn’t read “Ball Four” will be too interested in this story from a distance. However, the book is still out there if you wish to find it, and it is still worth your time. For those who have memorized its contents, though, this book will be eagerly gobbled up by those anxious to read the rest of the story.

Be notified of new posts on this site via Twitter @WDX2BB.
Posted by Budd Bailey at 1:07 PM