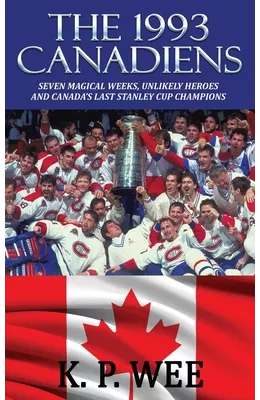 Reading selections can provide a bit of whimsy even when you aren't thinking about it.

My last sports book was on the 1993 NHL playoff series between the Los Angeles Kings and the Toronto Maple Leafs. The Kings won that epic matchup, which is still remember in Toronto for obvious reasons, and advanced to the Stanley Cup final. There the Montreal Canadiens were waiting.

By coincidence, my next sports book (I usually read them in the order they are received) is on ... the 1993 Montreal Canadiens. In fact, "The 1993 Canadiens" is the title. Well, it's good to see how the story comes out.

That Montreal team has an interesting place in history. The Canadiens went through much of their history winning a championship every seven years or less. But the 1993 title was their last as this writing - 27 years later. What's more, no other team from Canada has won the Cup in that span, which is downright odd.

It's often said that you have to be a little lucky to win a Stanley Cup, as a lot can go wrong along the way. In hindsight, a great deal went right for the Canadiens in that particular spring - which, as the subtitle says, indeed makes them unlikely heroes.

You start with the fact that Montreal won ten straight overtime games that year. Apparently the law of averages was repealed, because there is a lot of luck in extra time games. Of course, the Canadiens had the advantage of Patrick Roy on his side, and he was pretty much unbeatable when it counted that year. That playoff run really put him in the argument about the identify of the greatest goalies in history.

Then there were the matchups. Montreal had a tough time with Quebec in the opening round but got through it. The next team on the schedule was not powerful Boston but rather Buffalo, a sleeper as these things go but a team that was too banged up to be a strong Cup contender. Then the Islanders were up next in the conference finals, as they surprised powerful Pittsburgh.

That brings us to the finals, where the Kings were waiting after a rugged seven-game series. They did have Wayne Gretzky, who was just about at the end of his peak performance years because of back problems. The rest of the roster had talent and the team was on a nice roll, but even some of the Canadiens thought the Maple Leafs would have been a tougher opponent.

Author K.P. Wee takes an unusual approach in writing some of this book. He has found some of the players who didn't see a lot of ice time during the finals, and told their stories in chapters that alternate with descriptions of the games. Checking in are such players as Jesse Belanger, Gilbert Dionne, Sean Hill and Stephan Lebeau. The results are a little mixed. It's interesting to check out the stories from guys who don't have the chance to offer a retrospective on their careers very often; the league isn't filled with Gretzkys. Still, some of their observations about the playoff games themselves come off as less than insightful in spots.

It's easy to appreciate the research that went into this one. There are plenty of quotes from newspapers and the link. I appreciate the fact that former two co-workers of mine, Bob DiCesare and Jim Kelley, are quoted a few times. Hockey writer Todd Denault gets plenty of ink too; he wrote a book some years ago on the 1992-93 season, so he knows a lot about the subject.

"The 1993 Canadiens" might not be that interesting for those who don't live and die with the fortunes of Montreal's hockey team. However, it will bring back some good memories for those who do think that way.

Be notified of new posts on this site via Twitter @WDX2BB.
Posted by Budd Bailey at 6:02 PM