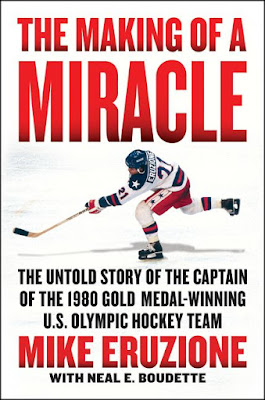 Mike Eruzione will be the first person to tell you how that particular phrase can describe the biggest moment of his life perfectly.

Eruzione scored the game-winning goal in what probably was the most dramatic sporting event of the 20th century: America's win over the Soviet Union in the 1980 Winter Olympics in Lake Placid. Team USA went on to win the gold medal in that tournament two days later.

The players and coaches will be remembered forever. The team went its separate ways immediately after a stop at the White House after the Olympics, but they always will be linked by their participation in those Games.

Eruzione begins his story with tales of origins and place. He was part of a big family, filled with relatives who got together on regular occasions and filled up whatever house they happened to be in. The center of attention was Winthrop, Mass., a insular suburb of Boston that probably would be called a classic American community. Eruzione was a good athlete growing up, but not a great one. He was about to play small college hockey in Massachusetts when his sense of timing first came into view. A scholarship opened up at Boston, and coach Jackie Parker offered it to him at the last minute. The pair stayed together through four straight Frozen Four appearances.

After a little time in minor-league pro hockey under a tryout contract, Eruzione decided to try out for the 1980 Olympic team - and made it. There he joined such future NHL players as Neal Broten, Mark Johnson, Mike Ramsey, and Ken Morrow - all of whom were coached by Herb Brooks, taking a year off from duties at Minnesota to guide Team USA. The book gains steam, at that point, as you'd expect - even though you know how the story turns out. Eruzione says when his friends want to kid him, they point out that his game-winning shot against the Soviets was three inches from missing the net and making him anonymous.

There have been good books (ones by Tim Wendel and John Powers, for example) about the run-up through Lake Placid, and the story hasn't lacked for coverage since then. What's somewhat striking here is how much of a bubble Eruzione and his teammates were in. They thought they were just playing a hockey game. They didn't realize that they were firing metaphorical shots in the Cold War, which was at a tense point because of the Soviets' invasion of Afghanistan.

One of the striking points of reading this now is that the game of hockey has changed so much in the past 40 years. The Americans essentially used the game of speed, passing and puck possession that the Soviets first displayed to the West in the Canada-USSR series in 1972. Now everyone plays that way, and most of the physical nonsense that was preached in the 1970s has been left in the history books.

Once life calmed down for Lake Placid, Eruzione decided that a gold medal was a tough act to follow. He passed up the chance to play in the NHL, and instead has been Mike Eruzione for a living. Good move. He's still in Winthrop, and seems more than happy to chat with anyone who asks about Lake Placid. Mike gets to see the gang for a variety of reasons on a fairly regular basis - they probably didn't guess for a while that they would be linked forever .

"The Making of a Miracle" has its charms, and it is told in a friendly if compact style. There are those who have consumed all available stories about Team USA's win, and they won't find a whole lot here about the road to Lake Placid that's new to them. (I will confess to being in that minority.) However, for those who weren't around at the time or never bothered to consume any of it, Eruzione's book is a good catchup on what all the fuss is about and why we cherish the moment.

Be notified of new posts on this site via Twitter @WDX2BB.
Posted by Budd Bailey at 5:31 PM