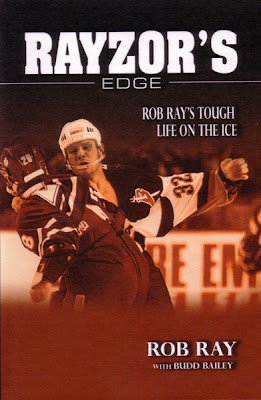 (Of the reviews of Rob Ray's book, "Rayzor's Edge," this seemed like the most insightful. It's from Ray's hometown paper, and is presented courtesy of The Shield.)

Stirling -- You can't judge a book by its cover.

During nearly a thousand games in the NHL, Stirling hockey sensation Rob Ray did a lot of talking with his fists. Now retired from the ice and working in part as a hockey analyst, Ray has taken a different approach. And with sales of his new book surpassing virtually everyone's expectations there's no denying the fact that the Rayzor's pretty sharp.

Co-written with Buffalo sports writer Budd Bailey, Rayzor's Edge: Rob Ray's Tough Life on the Ice is an insightful look at the game, the players and what is sometimes considered the ugly side of hockey. But more than that it's about life and home; before, during and after a professional hockey career.

Many players like him in the NHL bounced from team to team, but Ray spent nearly his entire career as an enforcer with the Buffalo Sabres. He lives there still.

And the reasons seem pretty clear. He understood his team's approach, the enforcer's role on the ice and the business of the game of hockey. And while that all changed significantly during his NHL tenure, Buffalo remained a constant and Ray was able to endure as a fan favourite and respected tough guy with the ability to turn the tide.

What impressed me the most with Rayzor's Edge though, was his sincerity, humility and matter-of-fact delivery. This book is as straightforward and honest as a punch in the nose.

There are no pretensions here. The words come off the page like the man's sitting across the table simply telling it exactly as he sees it. And while there are no deep, dark hockey secrets exposed either, there is a side of Rob Ray the average hockey fan was never able to appreciate on the ice. Exchanging blows with the likes of Tie Domi (as he does on the book's cover) is how most people saw and expected to see the longtime Sabre. In print, and reflecting on the game he loves, Ray has a much less daunting persona. In fact, after reading the book, I'm pretty sure he's exactly the kind of guy I'd like to meet in a dark alley in a seedy part of town.

His job on the ice was to be a physical presence, to intimidate and to shift momentum, and he always took that job seriously. But off the ice his role was quite the opposite, and one he still approaches with equal intensity. Ray says he never took his hockey career for granted. Instead, he was in an almost constant state of doubt wondering whether or not the season he was playing would be his last. And it is perhaps that quality more than any other that accounts for his own generosity and sensitivity of spirit.

There is a collection of photographs in the centre of the 170-page book depicting Ray as a youngster on an outdoor rink and as an NHLer near the end of his professional career. In between are various photos taken both on and off the ice and many on-ice shots show Ray, half-dressed, (prior to the "Rob Ray Rule") in the heat of a slugfest. One shows him tangling with the incomparable Mario Lemieux. There are two in particular, however, that stand out. They show Ray in hospital rooms visiting with sick children. And in those photographs, more than any others, he is nothing less than a superstar. The children's eyes say it all. They look, in awe, to a hero whose company they appear privileged to share.

The funny thing is, Ray has that same look. Doubtless he was humbled, perhaps even awed, by a bravery he could never hope to match on the ice.

I've watched a lot of hockey over the years and I remember when Rob Ray came onto the NHL scene. And I'm sure I never before referred to him as an honest, hard-working hockey player. Today though, I can think of no better way to describe his stretch as a pro. And from what I understand, that's him. And his honesty and his work ethic came straight out of Stirling.

Learn more about the book.
Posted by Budd Bailey at 11:51 AM