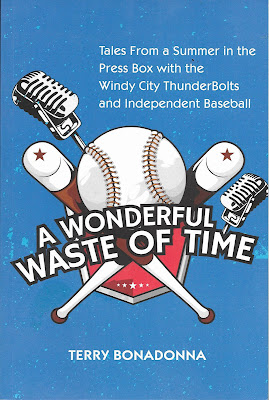 Terry Bonadonna had me on the first page of the introduction to this book.

The future baseball writer describes how he was the biggest baseball expert in his school years, to the point where people would ask him trivia questions about the sport just for the heck of it. Yup, that was me.

I remember one time someone asked me out of the blue, "Who won the 1935 World Series?" The secret to coming off as Mr. Know-It-All in some cases is to give a fast answer, even if you don't know it. As I recall, I blurted out "Cincinnati Reds" in less than a second, causing Joe Frisk to shake his head in wonder. (The Detroit Tigers were the actual winners.) So we're kindred spirits.

I somehow heard that this book was worthwhile, and eventually got around to reading it. "A Wonderful Waste of Time" works quite well in spite of some small obstacles.

This is the story of the 2017 Windy City Thunderbolts of the Frontier League, and its announcer. Right away, that's going to require some explanation for non-baseball junkies.

The Frontier League is a collection of baseball teams that are professional, but out of the formal structure of organized baseball. This Midwest-based league (there are a couple of others) feature players who weren't quite good enough to latch on to a major league organization for one reason or another, so they head to this league for another chance. They probably would be competitive with Class A teams in the minors, mostly because the players might be a little more mature that the prospects working their way up the ladder to the big leagues. Occasionally, the second chance works out. But if it doesn't, well, playing baseball beats working for a living.

You might think that a book on a bunch of 2017 baseball refugees, playing in a league that few know about with players that no one knows, might have trouble attracting an audience. That's probably right. But the good news is that the book doesn't date at all. The reader gets to hop on the bus and go for a season-long ride with the Thunderbolts, who are located in the Chicago suburbs. You could change the names and places, and it would still ring true. This is timeless.

By this stage, Bonadonna already had been around the league for several summers as a broadcaster. So he's familiar with the league and how it works. There are stories about the team and its players and staff, but this is more of a diary about how the broadcaster's summer went.

The author really captures the feel of baseball at this level. He's one of the few people that probably cares about the outcome of the games. The players are trying to land a contract, while the front office is more concerned with attendance than wins/losses. That leaves Bonadonna, compiling notes about the players and coming up with a complete picture during the broadcasts - which probably don't have a particularly large audience.

The baseball life is a difficult one at this level. The bus rides can be long, the hotels can be spotty, and nutritional goals take a pounding. Seven straight ballpark cheeseburgers for dinner is the sort of record no one wants to hold. Take it from someone who has been around sports at various levels all his life - the conversations and thoughts here offered by Bonadonna are authentic and interesting.

He's not a bad writer, either. The story flows along rather nicely as the season progresses. The biggest complaint is that it's difficult to know where all of the teams are located. Some of the cities have generic names, and others use nicknames like "Windy City" (at least you can sort of guess where that one is). A little more clarification of the teams and their locations would have been nice.

A postscript might have been nice too, since we are talking about the 2017 season. What happened to everyone after that campaign? Anyone find success?  Bonadonna does have a website (TerryBonadonna.com), and he's still working for the Thunderbolts although he apparently isn't broadcasting any more.

"A Wonderful Waste of Time" clearly isn't for every sports fan's taste. But it is a thoughtful look at a life that usually goes unexamined. It goes by quickly at a little over 200 pages. If you can find a copy of this self-published book, pick it up for your next long bus ride.