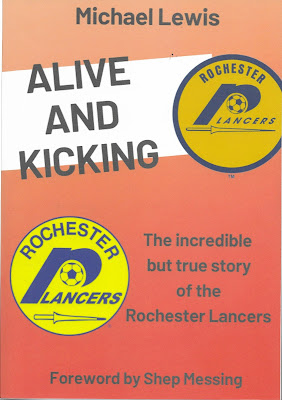 The Buffalo History Museum used to sponsor an authors' gathering on the Saturday afternoon after Thanksgiving.  A local group would gather in an attempt to sell books to the public in the Holiday season.

The subjects of those books were all over the place, and sometimes the same people would be back, year after year. I can't say I paid much attention to the writers of fiction, since I never read that category (I will add quickly that I can appreciate the efforts of someone who made up a good story; I could never do that.)

As for the nonfiction writers, their dedication certainly was on display. They sometimes take a narrow subject and expound on it for a few hundred pages - even though it might not be of great interest to many people besides themselves. You've got to love it to do it.

That brings the conversation to Michael Lewis. He's a writer who worked in the Rochester area for a while and almost stumbled on the world of soccer through an assignment. And ... he learned to like it. Michael not only followed Rochester's voyage through the stormy seas of American soccer history, but he even popped up in Buffalo a few times to cover that city's indoor soccer developments. Those seas were pretty stormy too at times, and the cast of characters sometimes overlapped. Lewis went on to other positions, and he's stuck with soccer along the way.

That makes him the perfect candidate to write a history of the Rochester Lancers. The book is called "Alive and Kicking," and its depth is a little overwhelming.

That team was its city's only entry into the big time in sports, surviving by accident over the years with its finances hanging by a shoestring. Soccer in this country sort of bubbled up from a collection of local teams, often involving immigrants. The nation's leagues started to become more organized in the 1960s, and Rochester's team sort of hung around when national leagues were being formed.

That led to a problem, particularly as some major financial players moved into the game in the 1970s. Rochester's team was still in Rochester, a region without that many people compared to the opposing cities. Add to the fact that it used a high school football stadium as its home, and the Lancers were always playing from behind economically. The franchise finally perished after the 1980 season.

Still, it was quite a ride. Part of that was due to the financial problems, which always leads to odd events such as player and coach turnover and bizarre road trips. Soccer also attracted some interesting personalities. It probably took a special type of person to try to plant the seeds of soccer in a new land, and those who came to America certainly qualified.

The games are included there, of course, in the loving detail that only a true fanatic would appreciate. But the stories are here too - of unexpected heroes, villains and rivalries; of ownership fights; and of coaches charging onto the field to personally complain about officiating.

I am willing to admit that I'm not the target audience for this book. I saw a few Lancers games in person, including the famous contest that the teams allegedly at least talked about fixing the score to ensure that both teams would qualify for the playoffs. Mostly, though, I wanted to learn a little about some of the Rochester names who turned up in Buffalo in the Major Indoor Soccer League. I have to admit I skimmed through good-sized sections of the game stories presented here within the 454 (!) pages.

But I can appreciate the effort that went into "Alive and Kicking." It's a self-published book without any frills - just pure information. So if you followed Rochester soccer during the 1960s and 1970s, this exercise in nostalgia ought to bring you several days' worth of delightful memories as you plow through it.