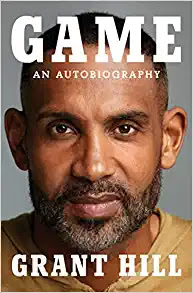 It didn't take long at all for basketball fans to fall in love with Grant Hill's game.

He arrived at Duke in the fall of 1990, adding his talents to a roster that already had such stars as Christian Laettner and Bobby Hurley. Hill was 6-foot-9, and he immediately showed why he was so extraordinary. It was once said about Grant's father, football player Calvin Hill, that he could have played any position on the field when he suited up for Yale University. His son was just like that too. Need someone to guard a point guard? Jump center? Rebound? Grant was your guy.

And he all made it look so darn easy - which, of course, discounted the hours of work that made it all possible.

No one, then, should be surprised that some of those same qualities are on display in Hill's autobiography, "Game." His writing is as smooth as a steal and a layup on the court.

Hill's story for the most part is as smooth as his game, as he seemed destined for success. Calvin - a former NFL star who later worked with teams to help troubled playes - and wife Janet were not only great role models for their only child but for others as well. Janet picked up the nickname "The General" from Grant's friends over the years, as she was a special assistant to the Secretary of the Army for a period.

Eventually Grant arrived at Duke, where he fit in with one of the great teams in college basketball. There were some strong personalities on those squads, and maybe it's not surprising that the people on the roster aren't particularly close years later. It might be giving Hill too much credit to say he was one of the "glue guys" that kept everyone together in that era. Then again, maybe it's not.

Then it was on to the pros for Hill, where there were unexpected bumps in the road. He was drafted third overall in 1994 by the Detroit Pistons, where he played at a high level on some mediocre teams. When his first chance at free agency arrived in 2000, Grant jumped to the Orlando Magic - where he immediately developed ankle problems. He spent more time on the sidelines than on the court in those seven years, and implies here that the medical treatment was less than appropriate. He came close to dying because of an infection in 2003. Even the storybook tales have some bumps in the road. Unless you followed the Magic in that era, you probably aren't aware of how difficult those years were for him.

Hill finally returned to health (relatively speaking) around the time he left Orlando in 2007, signing with Phoenix. He wasn't a star any more, but settled nicely into the job of role player for several years. Hill ended up playing 18 years in the NBA. Grant was back on the right track, and he has apparently stayed there. Hill married Tamia, a world-class singer from Canada, and they have had two children who we can only assume are going to be overachievers too. Grant eventually made the transition to basketball broadcasting, working the Final Four of the NCAA Tournament. And, oh by the way, Hill owns a share of the Atlanta Hawks. The Basketball Hall of Fame called him along the way.

That's a very interesting life, of course, especially for someone who hadn't reached 50 years old when he wrote it. But the best part is that the story is so well told. The story flows together quite seemlessly, and Hill is even willing to admit his (few) mistakes that he made along the way.

The result is a biography that is just like listening to an intelligent, thoughtful over a series of long dinners - and what could be much better than that? "Game" is a top-flight effort that even non-basketball fans will appreciate.

Be notified of new posts on this site via Twitter at @WDX2BB.