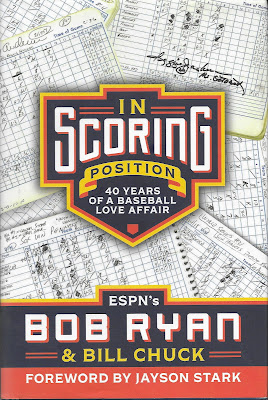 By Bob Ryan and Bill Chuck

Bob Ryan and I have at least one thing in common. We reflexively, and perhaps even compulsively, keep score at baseball games.

That was a skill that many people knew back in the day, which is why teams sold scorecards at games. Now, if you go to a game, you are in a distinct minority if scribble down the lineups before the game and then follow the action by pen and pencil. Me, it adds to my enjoyment of the game and provides some context to what has happened.

The difference between Bob (OK, I've met him a few times) and me is that he has put all of his scoring efforts into personal scorebooks. I started doing that about 15 years ago, but haven't quite seen enough games to fill up the thick book with games yet. (Don't worry, Book No. 2 is on my on-deck circle, warming up.) The books no doubt fill up a shelf in Bob's home, waiting to be reviewed.

And reviewed they were at the start of the pandemic. After all, what else was there to do? Bill Chuck, a veteran baseball researcher, heard about Ryan's hobby and wondered if there might be a book floating around somewhere in those old scorebooks.

It turned out Chuck was right. The resulting book was called "In Scoring Position," a nice play on words right off the bat.

We start with a May 7, 1977 game in Fenway Park in Boston, as Bob Stanley blanks the Angels. We end on April 19, 2021, as the Red Sox allowed some fans back in the building for the first time since the height of the pandemic. The book is produced with a similar format for each game. After a reproduction of one of the pages from the original scorebook, Ryan writes about the game itself - sometimes quoting his own game story, and at other times telling about how he came to be at that particular game.

Chuck then follows along with pieces of information that are either directly or indirectly connected to the game. He's really good at this stuff, and it shows with every page. I enjoy such material, particularly to drop into my print stories. (Confession: I keep track of a variety of things for my lacrosse stories, so that I can ask questions such as "Your team hasn't opened a game with a 6-0 lead since at least 2005. What did that do for you during the rest of the game?" That drew a double-take and a "How did you know that?" from the coach.)

Put these qualities, and these two people who are really good at their jobs, together, and you should come up with a good book. And for some people, this publication will meet that description perfectly. But it's unlikely that some readers will be as enthusiastic as the natural base.

The first catch comes with the fact that this book is filled with Red Sox games. That is no surprise, since Ryan has lived in the Boston area for all his professional life. So most of the names and some of the trivia are centered around the Red Sox. If you follow this particular New England team, this is fine. But if you are sitting in Minnesota trying to keep up with the Twins, well, this might leave you a little, um, cold.

The image of one page of the scorebook (in other words, only one team's batting order) leads off each game, but it is small. I suppose you could get really close to the page or use a magnifying glass (do they still have those?) to read the plays of a particular game, but that's quite a bit of work. I'm not sure if a slightly bigger image might have helped enough to make it useful, but its current size is going to make it more of a decoration than a tool for the reader.

In addition, this book goes for almost 450 pages. That's a lot of games. In fact, it's probably too many. Cutting the volume down to 350 pages might have helped. After all, since all of the games are bite-sized individual stories, there's not much to push you along through the book.

"In Scoring Position" is a fun read, but maybe it could have been better. Maybe someone will try this format in a more generic way. In other words, "Baseball's Greatest Games" - complete with a readable scorecard and related facts - or "World Series Games of 2000s" might do pretty well.