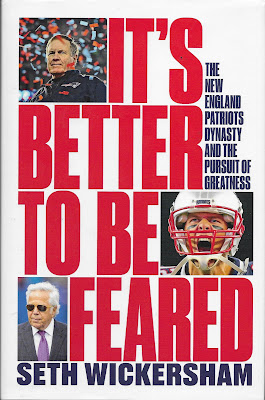 As someone who has spent most of the past half-century in Buffalo Bills country, it's been easy to avoid discussions about the New England Patriots during the first two decades of this century. Who wants to read about a team that comes into town on a yearly basis, beats up on the locals, and then leaves after taking another step to the divisional title?

Even so, there has to be a little respect toward what Bill Belichick and Tom Brady, among others, did during those years. If you stay in Western New York long enough, you'll hear that somehow, some way, Belichick and Brady will figure out a way to win - especially collectively. Brady won't be around any more to torment the team's fans, but Belichick is still lurking.

Even so, it was the combination of the two, along with so many excellent players and coaches behind them, that made the Patriots one of the great dynasties in football history. That description carries with it some degree of fascination for any football fan. So how did they do it?

Therefore, it's safe to read "It's Better to be Feared" from the stand of the opposition. And what a job Seth Wickersham has done in putting together a history of that fabulous era in the sport. The word to describe it is "dense" - because there's a lot of good information jammed into it over the course of more than 450 pages.

If you have been following the Patriots over that time even from a distance, you know the outline of the story already. New England won six Super Bowls between 2003 and 2019, and Belichick and Brady certainly rank as at worst one of the best ever at their respective positions of coach and quarterback. But what went on along the way?

That's where Wickersham really shines in his reporting. It sure sounds like he saved a lot of interesting notes that he filed away during New England's long, magicial run. This is the time, as journalists say, to empty the notebooks. The result is a book that is always fascinating and never boring.

There's certainly plenty of reason to admire the cornerstones of the franchise, and the author - who works for ESPN - supplies them. Belichick always seemed to be a step or two ahead of the opposition, thanks in part to a combination of smarts and hard work ... plus some more hard work. Brady used the same qualities in a different way, working on improving his game throughout his career and figuring out how to solve opponents' defenses. That's particularly true in the final minutes, when Tom always figured out a way to win.

Are they completely admirable characters? It doesn't sound like here. Certainly Belichick deserves some criticism for the so-called Spygate scandal, when the team was caught videotaping the other team's signals from the sidelines in an attempt to gain an edge. He's always come across as an odd personality, and his relationships with assistant coaches, staff members and players frequently has been complicated. It's probably odder than you think, based on this book. Sometimes Belichick will help his coaches and staff receive better jobs with other teams; other times he'll consider such departures as an act of treason - see Eric Mangini, apparently - and cut them off.

As for Brady, he might fall into the classification of "be careful what you wish for." He relentlessly pursued excellence and achieved it, and then some. The catch was that as he became the biggest star in the football universe, he became the biggest celebrity in the football universe. Marrying a super-model didn't exactly lower his profile either. By the end of his run with New England, he couldn't wait to leave the place to sign as a free agent with Tampa Bay. The three-cornered relationship with Brady, Belichick and owner Robert Kraft seems difficult to manage.

Along the way, Wickersham takes you to places where usually we're not allowed to visit. One-on-one conversations. Meetings. Parties. Labor talks. Trade negotiations.

There are a few nuggets that come up along the way, even for Bills' fans. For example, the Patriots lost faith in Drew Bledsoe because of an apparent inability to take what was given to him. The quarterback usually thought deep ball instead of short pass. Bledsoe also was immobile, relatively speaking, so the Patriots had no trouble encircling the pocket to create pressure and potential sacks.

"It's Better to be Feared" may cover some of the same territory that other books on the Patriots' Years did, and some duplication of stories is hard to avoid. But it seems as if this is the book to read on the subject, particularly since it does such a nice job of putting a bow on the end with Brady's departure for Tampa Bay. This was the sports book of the year according to Sports Illustrated, and definitely is a necessary addition to a football fan's library.