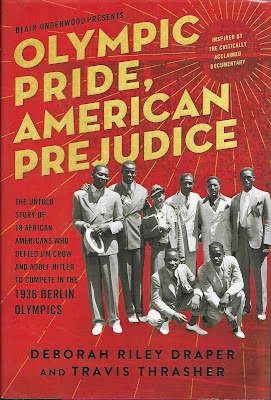 A good case could be made that the 1936 Summer Olympics were the most dramatic event of its kind in history. Few of the reasons why concern athletics.

The 1930s are associated with a worldwide depression. While it's difficult to try to rate levels of poverty, it's fair to say that Germany was in as much chaos as any nation at the beginning of the decade. That nation had been devastated by World War I, and the collapse of the economy proved too much for the existing government to overcome. That in turn led to the rise of Adolf Hitler and the rise of the Nazi party in Germany.

While the overall costs (in all areas, it should be said) were horrific, Germany did settle down economically for a time. Hitler was anxious to show the world the new German state, and thought hosting an Olympics was the way to do it. By 1935, the Nazis' anti-Jewish policies had collected the attention of the world, and many wondered if the United States should boycott the Olympics. American Olympic Committee president Avery Brundage went to Germany, was assured that Jews would not face discrimination, and helped get the formal invitation to the Games accepted. In hindsight, Brundage set an Olympic record for naiveté.

America had another problem entering the games. "Separate but equal" was the law of the land in regard to African Americans, but some had overcome major obstacles to become potential Olympians. While racism was in full bloom in this site of the border, it seemed hypocritical to ignore that while working to obtain an open Olympics.

The Games went on with full military precision, and they took place with the participation of 18 athletes who were part of the American team. Their story is told in the book (and accompanying documentary), "Olympic Pride, American Prejudice."

Authors Deborah Riley Draper and Travis Thrasher take a look at all of the African Americans on that team, although some receive more attention that others. All of them certainly overcame a lot to get that far, as economics certainly worked against them. Keep in mind that many of the athletes had to raise money to simply pay their expenses involved in such trip. That was on top of the racist obstacles that were often thrown in their way during their years-long journey to Berlin.

The book neatly highlights a couple of stories that probably deserve to be told. The first centers on Jesse Owens, who won four gold medals in track and field to neatly destroy any thoughts that Hitler might have had about using the Olympics as a demonstration of "Aryan supremacy." The catch comes in the tale that Hitler snubbed Owens by not greeting him when Owens had won a gold medal. Draper and Thrasher point out that on the day in question when Hitler was in the stadium, Owens had only won a heat and wasn't a candidate to meet the Fuhrer. Cornelius Johnson did win the high jump that day, and if was snubbed that day, he was. But Hitler had left the building that point, and we'll never know if it was a deliberate act to avoid shaking hands with African-American winners.

The other story centers on the relay races. Two Jewish runners on the American team had been replaced at the last minute on the 4x100 team, probably in an attempt to avoid embarrassment of the Olympic hosts. A similar plan was hatched to change the lineup for the 4x400 team - except that the three "replacements" refuse to run. The United States team still finished second.

The biggest complaint about the book might be the way it is approached. Much of it is written in the present tense, with notes about what the principals were thinking at a given moment. It's a dramatic way of telling the story, but it's easy to wonder how much of it is accurate concerning a given moment.

We shouldn't forget the stars of "Olympic Pride, American Prejudice." President Obama salute them with a ceremony for their descendants during a White House ceremony in 2016. If you prefer movies on such matters, the documentary of the same name is available on YouTube. The books, though, works quite well.