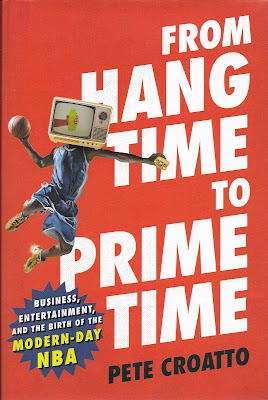 For those of you who think the National Basketball Association has been the proverbial big-league organization forever, well, think again.

It wasn't that long ago - in the mid-1970s, more or less - that the NBA was barely hanging on for survival. Attendance levels were low, television presence was rare, and the players - while talented - had image problems. The level of play was relatively good, but as a business this was hardly the hoop equivalent of the National Basketball Association.

It took less than 20 years, more or less, but the NBA eventually cleaned up its act and became a worthy partner to football and baseball at the top of the American sports pyramid. How that happened is an interesting story on its own, and it is well told in Pete Croatto's book, "From Hang Time to Prime Time."

Croatto gets things off to a great start. In the first 100 pages of the book, he outlined just where the NBA was about 45 years ago in a fascinating way, full of new details and information. The situation wasn't pretty. The number of people working for the league probably couldn't staff a small supermarket. The presence of the American Basketball Association had driven salaries up to unsustainable levels (at least, by the standards of the time). Some playoff games were either not seen nationally at all or on tape delay.

Larry O'Brien was hired as the NBA Commissioner in 1975. His first major actions were to settle an on-going legal dispute with the players to a satisfactory conclusion for all, and to help forge a merger between the NBA and ABA. I've always thought O'Brien's contributions have been a bit underrated as these things go, and Croatto gives him full marks for those accomplishments. But from there, O'Brien sounds like he didn't know what to do next. Instead, he'd sit in his office and talk about his good ol' days when he worked at high levels of government.

Luckily, help was on the way. O'Brien was smart enough in 1978 to hire David Stern, who had been working with the NBA as an outside attorney. And Stern changed everything, slowly but surely. The league started to figure out how to solve its problems. It realized it was not really in the sports business, but in the entertainment business. The role model forward went through Disney. Helping matters was the fact that two huge stars arrived in the same year - Larry Bird and Earvin "Magic" Johnson. They double-handedly destroyed the stereotype that basketball players were a selfish bunch, as their passing skills were off the charts.

The other steps came soon after that. The NBA All-Star Game was turned into a showcase event on the season's calendar. The owners and players agreed on a salary cap and rules concerning drug use. Most importantly, Stern took over as commissioner in 1984 - a few months before Michael Jordan arrived in the NBA. Soon the success stories started mounting.

The league was wise enough to embrace the fact that the players were the league's best sales tool. They were young, athletic, and essentially - as one person put it - running around in their underwear. Stars could drive the product, and they did. Jordan and Company not only were well suited for that job, but all of the players bought into the concept. That led to television programs, videos, international sales, etc. The league also embraced its African American side, as rappers and hip-hop artists picked up on such items as jerseys and sneakers, making them a way for young people of all types to have a route to connect with the game. In other words, people who didn't know Michael Jordan from Rick Robey still wanted basketball-connected merchandise.

Croatto certainly put his time into this project. He talked to a variety of people - the list of interview subjects goes on for five pages. Croatto had a few people turn him down, including Stern (the last request came shortly before Stern's death), but this sure feels like the complete story.

"From Hang Time to Prime Time" doesn't have much actual basketball in it, so be forewarned. It's a little difficult to make all of it fascinating. Still, for those looking for an explanation of how the NBA blossomed as a business entity, this book will rank as the definitive explanation.

Learn more about this book from Amazon.com. As an Amazon Associate, I earn from qualifying purchases.