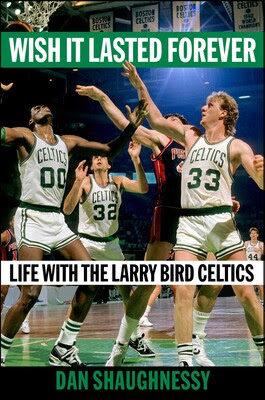 Dan Shaughnessy can be a tough sportswriter some times.

That's a little more rare than you might think. Criticism of sports figures has become increasingly rare, particularly in an age where athletes can go on their own outlets of social media - or, better yet, pop up on a team's ever-cheerleading site - in order to get a point across to the public.

Shaughnessy, a columnist for the Boston Globe, often isn't like that. He'll say what he thinks, and worries about the damage later on. It's not a way to be popular, but it's probably necessary. An objective viewpoint can be an important counterpoint these days.

Yet, in the book "Wish It Lasted Forever," Shaughnessy comes across as downright happy and occasionally apologetic. This may surprise his regular readers in New England, who are used to crusty.

The biggest reason that Dan is happy in this book is that he was more or less in the right place in the right time. He covered the Boston Celtics during the early 1980s. If there was a better assignment for a sportswriter to have in those days, it doesn't really come to mind.

First of all, the Celtics were good. Really good. They had Larry Bird on their side, at his peak. Robert Parish, Kevin McHale and Dennis Johnson were around for much of that time as well, and K.C. Jones and Red Auerbach are in the picture as well. Bill Walton even shows up for a too-brief appearance, and provides the title in talking about what is is like to play on a team like the 1985-86 Celtics. No matter what happened, this bunch was not going to lose too many games. Losses lead to unhappy people on a team; ask those who cover the Buffalo Sabres these days. The game stories start to read alike. Shaughnessy's biggest question in a given year was, will the Celtics win the NBA championship again?

What's more, this is a very interesting group of guys.  Bird comes off as having a very sharp mind, McHale and Walton are funny, Parish is silent (as opposed to his wife), Ainge is intelligent, Cedric Maxwell is charismatic. The group got along well. Shaughnessy was not a member of the band - there's always a wall up between the two sides - but he went to practices and games with the Celtics almost every day for months. Dan also traveled with the team, taking the same planes and riding the buses. It's a great seat, and Shaughnessy certainly enjoyed the vantage point. There's a really fun story about how Bird and Shaughnessy wound up in a free-throw shooting contest.

It's not all easy of course. One time Bird apparently got into a bar room fight and hurt his hand. Shaughnessy found confirmation of the story and found a eyewitness. The reporter told his boss that someone else should write the story because Bird would cut off access indefinitely, but was told to do it anyway. The story was written, and even teammates confirmed it later, but Shaughnessy did indeed pay a price.

The author also made the wise decision to reach back to the list of people from that era and ask them today about what happened back then. It does supply some good perspective into events.

The publisher has played up the fact that the book is something of a printed version of "The Last Dance," about Michael Jordan's Chicago Bulls. Based on "Wish It Lasted Forever," it seems like being around Larry Bird's Boston Celtics was a heck of a lot more fun. Celtics' fans will love this, and most sports fans should enjoy it.