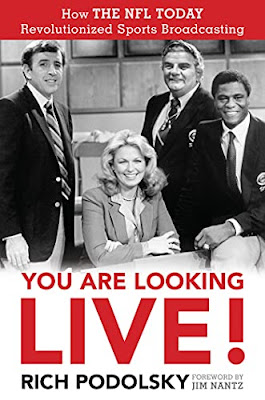 It doesn't take much for a football fan to return to the 1970s. The phrase "you are looking live" ought to do it.

That was the phrase that Brent Musburger often used to begin a CBS sports broadcast in that era. The words also served as an introduction to something of a new era in TV production, since it was relatively early to show several live scenes, one after another, in a broadcast. Musburger and Company did it on "The NFL Today," which established the template for the form in that time period. You really had to watch the show if you are a pro football follower in those days.

Rich Podolsky takes a look back at those days with something of a history of the show, entitled, of course, "You Are Looking Live!"

Watching football had become something of a national obsession by the 1970s, and CBS was interested in expanding the amount of programming devoted to the game. To do that, it had to put together some sort of compelling show that would force people to turn on their televisions at 12:30 p.m. instead of 1 p.m.

The cast of characters was crucial. Musburger was at the center of the action. From a technical standpoint, what CBS tried to do was close to insane in terms of complexity by Seventies standards. Not only did he handle it smoothly, but he added a touch of urgency to the proceedings. Irv Cross was a former NFL player who knew the game and was a polished broadcaster. He's not remembered as a trailblazer among African Americans broadcasters, but he should be.

Phyllis George, a former Miss America, blazed a trail in her own right. She showed that women could be a good-sized part of a successful broadcast. George did interviews that didn't have an X and O in sight. That was a time when some men refused to believe that a woman had a place on any sort of sports broadcast, and would complain about it loudly to anyone who would listen. I can't imagine what George's Twitter feed might have looked like back in those days - but it would have been ugly. Finally, there was Jimmy "The Greek" Snyder, a gambling expert given legitimacy by his mere presence. He also added an air of unpredictability, since you never knew what he might say. They all filled 30 minutes of programming nicely, and accomplished the goal of attracting an audience.

A couple of things are rather obvious about this book right from the start. It's rather thin at 200 pages or so. Therefore, it's going to be a quick read - which is fine for a subject like this. Podolsky in the introduction talks about how working on "The NFL Today" was the best five years of his professional life. That's something of a double-edged sword. He knows most of the principals involved in the show, on and off the air, and that allows him good access to those involved who are still around to talk about it. (Cross, George and Snyder have died in recent years.) But it also means that it's tough for him to be objective about the show, the people involved in it, and its impact. The author does talk to some people who competed against the show, and their comments are instructive.

At least Podolsky covers the major issues that come up during the course of the show's run. Snyder was the biggest problem for all concerned, occasionally doing something that embarrassed the network. The cast changed a bit as the years went by, and it wasn't as interesting. The pregame shows on CBS and Fox now last for an hour, and they aren't exactly Must See TV in my house. The lesson of "less is more" comes up, at least as compared to the original version.

"You Are Looking Live" isn't going to stay on the bookshelf forever. But if Podolsky set out to write a quick, relatively interesting read, he has succeeded nicely. Just make sure you're old enough to remember the original show before getting out your credit card.