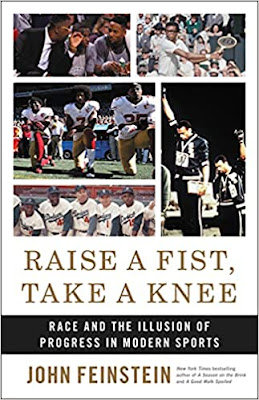 John Feinstein has a long list of books to his credit over the years, starting with "A Season on the Brink" - a look at Bobby Knight and Indiana basketball in the 1980s. He's written about basketball, football, baseball, tennis and golf, and it's fair to say that the books all have been of high quality.

"Raise a Fist, Take a Knee," as Feinstein is quick to point out, is different. Instead of taking one aspect of a particular sport, here Feinstein crosses the spectrum of sports to deal with one subject. And that subject is race, which probably could be called "the third rail" of journalism.

You know where he's going with this just by reading the subtitle of the book: "Race and the Illusion of Progress in Modern Sports." Illusion? You mean, we haven't made progress in the intersection of race and sports over the years?

Yes, we have. But Feinstein's point is that we haven't gone far enough in this area to approach anyone's satisfaction. Consider stories told about a couple of African Americans, just as an example. Eric Bieniemy has been the offensive coordinator of the Kansas City Chiefs since 2018, and an architect of the NFL's most explosive offense during that time. You'd think that he'd be the hottest individual candidate for a head coaching job by now; he's not, and it's easy to wonder what's going on. Bieniemy certainly has.

Then there's Lovie Smith, who spent nine years with the Chicago Bears - with four 10-win seasons and three playoff appearances. He was fired after a 10-6 season in 2012 - the only coach ever fired after that good of a record. Smith did take over a horrible Tampa Bay team in 2014, but was fired two years into a five-year contract after improving from 2-14 to 6-10.

This discussion could get tied up pretty quickly, but Feinstein has a secret weapon to make points. He talks to people, at length. The list is impressive: John Thompson, Doug Williams, Tony Dungy, John Carlos, Warren Moon and Dave Stewart among others. He gives them the time and space to talk about their experiences at the intersection of race and sports. A common denominator for all of them is that race always lurks in the background whenever they walk out the front door of their home, no matter what their status in life has been. They all have been taught that in order to succeed in American society, they can't afford to be simply as good as the competition for success - they have to be a little better. They also have been stopped for Driving While Black, in some cases multiple times.

For the most part, Feinstein gets out of the way of the interview subjects. That's not to say the reader doesn't know where the author stands on the issue, because Feinstein makes his viewpoints quite clear along the way. Subtlety isn't his strong point here, but that's fine. Yes, as a white man he doesn't know what it's like to have his skin color arrive on others before any other part of his being, thus causing some to jump to conclusions. Perhaps it's better that way, in that he can ask the "what is it like? questions without knowing the answers completely already.

One of the key points along the way is that while the playing field has become relatively equal in many cases (if nothing else, discrimination by definition prevents a team from having the best possible roster on the field or court of play), opportunities in management are still limited to African Americans. It's frustrating to someone like Willie Randolph, who had a pretty good record as the manager of the Mets but who was fired in the middle of his fourth season. He's never had another shot at a managing job - in fact, he's supposedly only had one interview.

"Raise a Fist, Take a Knee" no doubt will be ignored by those who want to ignore it. But it serves as a good wake-up call and a down-to-earn discussion for those who we've come along way without realizing that we've still got a long way to go. If you are interested in a rational discussion of a subject that often turns people irrational, this is a good place to start.