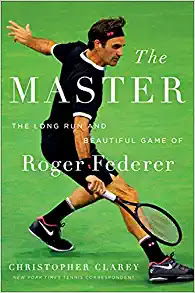 The number of people that hate Roger Federer must be close to absolute zero.

Yes, there might be a couple of tennis fans in Spain or Serbia who don't like the way that Federer has gotten in the way of their favorite players in big tournaments. But even fans of Rafael Nadal and Novak Djokovic probably have plenty of respect for Federer.

Roger has been on top of his game for around two decades, a ridiculous run. He set the record for grand-slam wins, and he's been gallant even in his defeats.

And has anyone been nicer along the way? Is there an athlete who could make you feel more comfortable in a chance meeting? Is there anyone who has been more of a class act while in the blinding spotlight of fame?

The answers are no, no, and no. Federer appears to be close to the age where he should be thinking about retirement, but he's not shutting any doors yet.

Still, his amazing career certainly is much closer to the end than the beginning. It's a good time, then, for a full biography to be written about the most famous athlete from Switzerland in history. Christopher Clarey, who works for the New York Times, has answered that call with his deep dive into All Things Federer with "The Master."

Federer first started to attract attention with his game as a teen, as he played in his first junior tournament at the age of 14. Eventually, Roger climbed up the ladder and attracted attention with his talent. About the only blemish in a lifetime of behavior came up then, when he developed a reputation as someone who could not control his temper and be a sore loser. How un-Swiss like! But that's hardly uncommon for that age, and eventually faded.

Clarey then moves into Federer's pro career. Roger turned pro in 1998, cracked the top 100 in 1999, and won a tournament in 2001. That was the year that the 19-year-old Federer caught everyone's attention by surprising Pete Sampras, the world's best player, at Wimbledon. Roger won that tournament in England a couple of years later, the first of 20.

Federer had a few years where he was unquestionably on top of the mountain; it just seemed like longer. Eventually, Nadal and Djokovic came along, and they developed one of the great three-sided rivalries in sports history. In 2008, Federer and Nadal played one of the great matches in tennis history at the Wimbledon final; it's odd that we remember Roger for a couple of his epic losses as well as his many wins. Djokovic won his first Grand Slam title in 2008 in Australia. And we were all off for a ride in which those three dominated the sport of men's tennis for more than a decade. If one of the three didn't win a major title, it was an upset. By the end of 2021, all three had 20 career titles. Part of me wishes that the numbers would stay that way, so they would be forever linked in history.

There's plenty of tennis in the book, of course. But Clarey certainly takes the time to explore other tangents on the subjects, with short biographies of the major influencers in Federer's life. That includes coaches, business associates, family, etc. What's striking is how well Federer has done to strike a balance in life, making sure he doesn't get overscheduled along the way. Yes, it helps to have a billion dollars stashed away, but his longevity doesn't seem to be an accident.

Clarey comes off here as a classic international reporter, vaulting around the world to cover the sport. I didn't know his name before reading this, but certainly he knows his stuff. Clarey has collected a ton of information here, even taking the time to fly to the town in South Africa where Federer's parents met.

There's only one drawback to this story, and it's a fairly big one. Federer can't be criticized for not having any drama in his life. He's succeeded by any standard on almost every level of his life. However, that lack of conflict or troubles that were overcome may not help the readability of the book for some. I'm not sure if someone who is less than a casual fan in the sport will want to go through this.

But those that do pick up "The Master" will find it rewarding. Federer wasn't much of a factor in 2021, mostly because knee problems and the pandemic. But, like Phil Mickelson on the golf tour, it's easy to think that Roger had one more great run left in him if his body will cooperate. If that happens, we'll all get to see the depth of the affection earned over these many years on display.