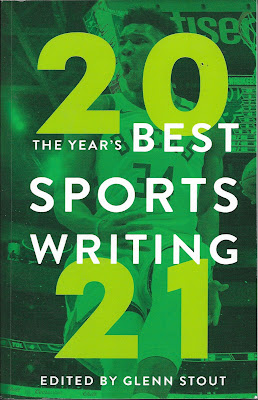 The idea of having an anthology of a given year's best sports stories has proved to be resilient to the point of being pesky. It just won't go away.

The first such book appeared in 1945 and ran for almost a half-century. If you have a good-sized library in your town, you probably can find them on some slightly dusty shelves. That lasted annually (one exception, due to illness for decades); I believe the Sporting News picked up the series at some point late in its run. Then it was reborn as The Best American Sports Writing, where it lasted 30 years. Readers of this blog know that the series was a staple of my annual reading.

That version died a year ago, and the chances of a rebirth at least from the outside seemed small. But Triumph Books came along and offered to revive, if that's the right word, the series under a slightly different management structure. Glenn Stout, who was something of a caretaker of the series before, moved up to be the editor on a one-time basis. He'll be giving up that role next year, and an editorial board has been picked to oversee the contributions. Let's hope for another 30-year run.

As we know, there's a lot of good writing out there every year, and it's tough to weed it down to the best of the best. We all carry our individual biases into such a book. In my case, the stories that deal with sports on a tangential basis have to work a little harder to draw me in. The book has articles on two bicyclists who happen to meet as they pedal in opposite directions while crossing the Eastern Hemisphere, and of two basketball-playing poets. They were a little outside my comfort zone.

But then came "The Inheritance of Archie Manning" by Wright Thompson of ESPN, and life was more than good again. This profile of a great athlete in his 70s who remains tied his glory days in college is one of those stories that you just don't want to end. And that was quickly followed by the amazing tale of pitcher Richard Dotson and his father, and "Hook Shot Charlie," and life in the NBA's bubble, and Kobe Bryant from two different perspectives, and ... well, you get the idea.

After almost 350 pages, the batting average for success stayed up to the series' usual standards. There were well-researched stories on the pandemic, Ivy Leaguers in baseball management and Andrew Giuliani. A piece from Runner's World on the death of an African American jogger hit home, in part because the trial of the case started when I was reading it. A story on the first inter-racial boxing match in Texas history was a favorite. And even some of those barely-sports stories lured me in - a burglar who stole Super Bowl rings, a hiker who disappeared, and a heart transplant recipient who bicycled across the country to see the grave of the donor.

I thought I had lost an old friend a year ago, but "The Year's Best Sports Writing" perhaps shows that you can't keep a good concept down. Welcome back.

(Be notified of new books on this site via Twitter @WDX2BB).