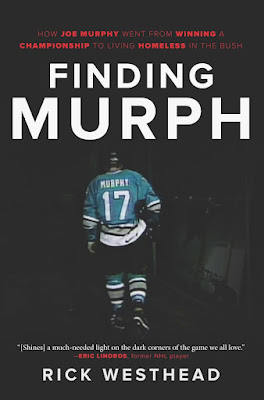 "Finding Murph" is one sad story.

It's the latest in something of an informal series of articles and books on the problems in the form of concussions and head-related injuries that take place during contact sports. Considering how long this issue was ignored by all concerned, I have no doubt that we'll be hearing and reading such stories for years to come.

Joe Murphy had it all by hockey standards, once upon a time. He was the first college player ever to go first in the NHL Entry Draft, as Detroit took him in 1986. He had trouble breaking into to the big leagues - it's tough to judge how 18-year-olds will do immediately when they are asked to compete against men. However, a change of scenery seemed to help. Joe was a part of the Edmonton Oilers team that won the Stanley Cup in 1990.

Less than a year later, Murphy took a huge hit to the head from Detroit's Shawn Burr during the game. He didn't miss much playing time, and actually rebounded to play rather well in the months after that. But Murphy's behavior, which could always be a little unusual at times, seemed to change for the worse after the hit. Murphy was still a decent player, but found himself bouncing around the league - Chicago, St. Louis, San Jose, Boston, and Washington. Can you be a disappointment after playing 779 games in the NHL, scoring 233 goals and earning a few million dollars along the way? Perhaps, because Murphy seemed as if he was capable of more.

Murphy fell off the grid for a while, floating from place to place. He came back into the news around 2018 when author Rick Westhead and former NHL goalie Trevor Kidd caught up with Joe. He was homeless, sleeping where he could in such places as the floor of the forest, in Kenora, Ontario - located near the Manitoba border not too far from Minnesota. The book idea started with those interviews with Murphy.

Westhead did an impressive job of collecting information about Murphy's life for this book. He talked to all sorts of people who have encountered him over the years, from people in his childhood all the way through the good times in the NHL and to the family, friends and strangers who deal with him now. You probably could argue that Murphy was on the immature side throughout his entire time in hockey; sometimes it's tough to deal with the entitlement that comes with people telling you how special you are in a particular skill.

Westhead also reviews the issues with the game of hockey and its accompanying concussions as seen through the prism of hockey administration. In other words, the NHL was quite slow in recognizing the risks associated with head injuries, and you probably could say the same about other levels of the game as well. The fear of lawsuits seemed to be paramount on their collective minds. Things are better now in this area, with baseline testing and mandatory layoffs after head trauma. Westhead does a good job of compiling a list of incidents that have affected hockey players in previous years, showing that this is hardly a new problem.

The only complaint with the book is that the portions about the NHL's reaction to the concussion issue, while quite damning in some ways, is a little disorganized and hard to follow easily. But you'll get the idea.

The last couple of chapters are tough to read. It's a review of what life was like for Murphy as of 2018. Governments always have had trouble effectively treating the effects of mental illness, and Joe is something of a poster boy for that. After much of the research was done, Murphy turned up in Quebec. Then in 2020, he was spotted wandering the streets of Regina, Saskatchewan.

Here in Buffalo, we're very conscious of concussions and their effects. Pat LaFontaine's career essentially ended the night he took a hit against Pittsburgh in 1996, although he hung on for a while. Kyle Okposo has had a couple of concussions and other medical issues. They helped to rob him of much of what seemed to be a promising career.

This is not light reading by any means. Still, "Finding Murph" puts a flashlight on the potential downside of athletic glory. It's certainly necessary to do that once in a while.