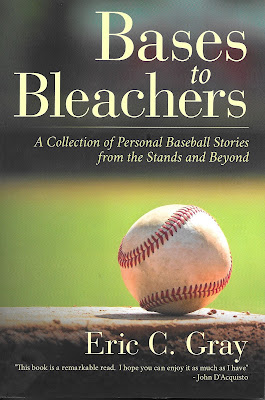 There's only one way to start a discussion about Eric C. Gray's book, "Bases to Bleachers" - with a story.

When I was seven years old, my favorite baseball team was the Boston Red Sox. In the spring of 1963, the team decided to change managers. I may not have realized at that age that managerial changes happened with depressing regularity for the Red Sox in that era, but I contained some youthful optimism that a new manager would help the team win games. So I sent Johnny Pesky a letter that spring, wishing him well in his new job. Mom no doubt put a stamp on the envelope, and off the letter went.

About five months later, late July I think, I looked at the mail - and there was a letter in a Boston Red Sox envelope. Yes, it was a reply from Pesky. He explained that he was just getting to his fan mail, but wanted to thank me for my good wishes and sent me the best of luck in return. I was thrilled, and put the letter and envelope in a special place for safe keeping.

Fast forward 22 years or so. I was working in radio in Buffalo at that point, and the city was hosting a special Old Timers' Game at War Memorial Stadium. One of the visiting players was, by chance, Johnny Pesky. After the game, I went into the locker room, and introduced myself. We shook hands, and then I said, "You know, John, when I was seven I sent you a letter when you were hired as the manager of the Red Sox."

He interrupted me, and said, "I hope to hell I wrote you back!"

I giggled, and said, "You did, and I always appreciated that. Now I get to tell you that in person." He smiled, and we did the interview. It was a nice moment.

Those are the stories that people remember on a personal level, of course. Gray went on a seven-year mission to collect anecdotes from as many people as possible. The total number of submissions extended well past 1,000 by the time he was done. Gray picked out a bunch of them for "Bases to Bleachers."

I have to admit that this book didn't make a great first impression on me. I'm not sure if this book was self-published or not (the company does both), but the layout seemed a small notch below top standard at times. The connections to baseball were a little weak and distant in spots. The author - maybe "editor" is a better word - has a lot of personal comments to add along the way, in part because his family and friends contributed some essays. Still, as I moved through the 330 pages or so, I found that my fondness for the publication grew. The stories seemed to get better, and there was something of a rhythm to the book while reading it.

Upon nearing the end, I checked the reviews in the usual on-line places. I can't say that I have seen many baseball books that have received more rapturous reviews than this one. It seems that Gray's work struck a chord with a lot of people; good for him that he made that discovery through hard work over such a long gestation period. I don't know why, but baseball generates such gentle tales from the public. Everyone's got a story about an incident or an encounter that they'll remember for personal reasons. Even me.

Gray announces in this book that he's planning a sequel, which I can't say I've seen before in a book. Star Wars movies, yes; baseball books, no. On the other hand, I'd bet a second book might be easier and better. Some people will notice this effort and have their own version of a baseball memory that's worth sharing. That means more Grade A stories in the selection file. The overall supply has to be close to limitless.

There's an easy test for a book like "Bases to Bleachers." If you see it in a bookstore, leaf through it and read a few of the stories. If you find them charming, then odds are very good that you'll find reading this book is a pleasant way to spend some time.

Be notified of new posts on this site via Twttter @WDX2BB.