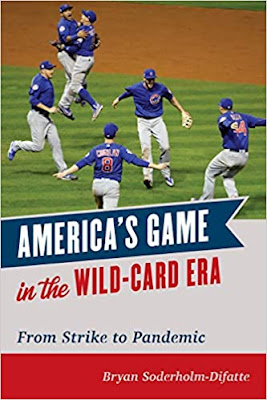 A discussion of most books starts with thoughts about the execution of the publication rather than the creation of the idea behind it.

"America's Game in the Wild-Card Era" is the exception.

It's a book that covers the last 25 years of history in major league baseball. That starts with the resumption of play with the famous labor action that cost the sport the 1994 World Series. It ends with what certainly will be remembered as another historic stoppage - the year the season was cut short because of the pandemic.

This book takes a look back mostly at the on-field matters that came up during the course of the quarter-century. There are certain matters that naturally need to be brought up in such a discussion such as steroid use. Even so, this emphasizes plays and games rather than luxury taxes and doping.

Bryan Soderholm-Difatte tackles this big subject but zooming in on a particular team at the start of each chapter. Therefore, we hear about the dynasties of the Braves and Yankees, the ups and downs of the Red Sox and Cubs, the tainted rise of the Astros, etc. It's important to note that all of the teams in MLB are covered here, at least briefly. The best games and players also are mentioned.

By the way, Soderholm-Difatte has a companion book out called "The Reshaping of America's Game" about the same era but written about the off-field matters. Give the man credit for ambition and work ethic.

The author has done some writing for the Society of American Baseball Research, and he has fulfilled his mission professionally. The facts are all there, and it's difficult to disagree with his conclusions. This version of events is a little dry in spots, but that sort of comes with the territory of writing such history.

While reading this, though, one question popped up. Who will be the audience for the book?

This is really familiar territory to big baseball fans, who are familiar with the game's big moments. Since the book is something of a research project and doesn't really seek out any fresh information, it's not as if there is much to learn by reading this particular recap. On the flip side, those have only a passing interest in the game probably won't care enough to read about 240 pages on baseball's recent history.

There's something called middle ground between those two extremes, I guess. But it's tough to say how big it is - especially with a $45 list price for the book.

Those who need some perspective on this era of baseball, with some teams rising and falling like penny stocks while others generally remain powerful, should find that "America's Game in the Wild-Card Era" will work pretty well toward that goal. Maybe a glance at the contents during a visit to the bookstore will provide you with some clues as to whether you fit the niche.