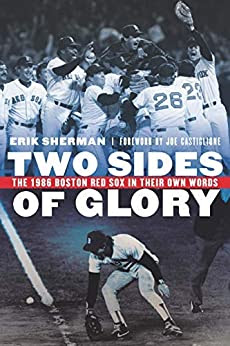 In the American League Championship Series in 1986, the Boston Red Sox were on the verge of elimination from the playoffs in the ninth inning of Game Five. The Angels had a 5-2 lead in the top of the ninth, and a 5-4 lead with two outs in the ninth. One more successful pitch, and the Red Sox were through. But that pitch never came, as Boston rallied. The Red Sox eventually won that game in extra innings, and the Angels went down meekly in Games Six and Seven to lose the ALCS title.

Fast forward a handful of days later. The Red Sox were one pitch away from a World Series title in their matchup with the Mets. Three hits, a wild pitch and an error later, the Mets had rallied in the bottom of the 10th to even the series. New York went on to win the Series a couple of nights later.

They say what comes around, goes around. Usually it doesn't happen that quickly.

The Red Sox are almost a case study of what happens to a team in such turnarounds. That's the draw to a book like "Two Sides of Glory," as author Erik Sherman goes exploring as he talks to several key members of that Boston roster.

Sherman has been down this road before. One of his books, "Kings of Queens" was a look at the Mets of that year from the perspective of 30 years later. So I guess Sherman has to plead guilty about working both sides of the street.

The author talked to such people as Bill Buckner, Roger Clemens, Jim Rice, Wade Boggs, Dwight Evans, Bruce Hurst, Marty Barrett, Rich Gedman, Bob Stanley, and Calvin Schiraldi. Steve Lyons also pops up, even though he was traded for Tom Seaver in the middle of the season and thus missed the best and worst parts of the season. Others talk about Dave Henderson and Don Baylor, who died before Sherman started the project. Buckner is on the record with an interview; he passed away in 2019. The one big omission might be manager John McNamara, who might have been able to put some perspective on events. He passed away in the summer of 2020.

That's a lot of talent - there are three Hall of Famers and Evans just might make it four some day. It's impressive that just about everyone in the book is quite open about experiences in the 1986 playoffs as well as the rest of their careers. They also add some new perspective about events. Just about everyone, it seems, can't figure out why McNamara took Clemens out after the seventh inning of Game Six when he seemed to be in command. Dennis "Oil Can" Boyd still thinks he could have won Game Seven (he was passed over in favor of Hurst thanks to a rainout.), and he's still not happy about missing that chance. It's quite apparent that the members of the team got along extremely well. Hurst, who hasn't revisited those days very often, says here that he'd rather lose the World Series with that group than win with any other team.

There is one aspect of the book that gave me a little pause. For each chapter, Sherman usually describes the run-up to the interview, and provides something of a transcript of large portions of the conversation. Along the way, there are references to some of the subjects as friends. The tone of the questions is more than favorable - in some cases, too much so for at least my tastes.

Yes, you can catch more flies with sugar than vinegar. Most reporters try to be diplomatic in their questions in relaxed situations anyway. No, you don't expect Clemens to be grilled about steroid use in a book like this. He's there to discuss 1986 and his time with the Red Sox. Still, some of the text made me a little uncomfortable. Perhaps editing the book a little differently to put a bit more distance between interviewer and subject might have worked better for me - with the added advantage of highlighting the most interesting parts of the conversation earlier in the individual chapter of the finished product.

The 1986 Red Sox team's narrow miss prolonged the wait of that franchise to win a World Series for another 18 years. Virtually everyone in the book who is asked says it was a thrill to watch the 2004 team finish what the '86 team started. It's easy to wonder if that '86 group thought that players on the team relaxed after that World Series win, and thus could play to their potential in winning titles in 2007, 2013 and 2018. After all, the "Curse of the Bambino" was gone.

"Two Sides of Glory" works well enough for Red Sox fans today. After all, the heartache they felt in 1986 turned out to be relatively temporary rather than never-ending. Those readers can not be a little less emotional as the matters of what went right and what went wrong in that fateful October are explored.