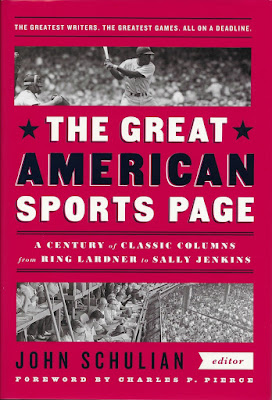 It seems that "The Great American Sports Page" has created more buzz in the media than most of the other new sports books this year. It's been written up in a quite a few outlets during the course of the spring/summer.

This should not be surprising.

I would bet that any self-respecting media member who started to read this book was positively entranced. Come to think of it, most sports fans with a sense of history ought to feel that way too.

Editor John Schulian apparently was in charge of this project, and he was well qualified for the task. Schulian was himself a columnist for a couple of big-city dailies, and has put together anthologies on boxing and football. He's smart, and good.

This anthology is not about a specific subject, but it still has a unifying theme - at least in theory. The idea was put a collection of stories together written by columnists who were on a deadline. In other words, the authors didn't have time to sit around and discuss the finished product over coffee and cake with editors and bosses. The story was due in less than an hour.

Take it from someone who has been there - this is not easy. Most writers are happy to get the score right and fill the allocated space in such situations. But to write a story that makes a point and does it gracefully, well, this is a rare skill.

Part of a joy of reading a book like this is taking in stories and authors that cover a wide range of time and subjects. Check, check. This book goes back to W.O. McGeehan, Damon Runyon and Grantland Rice almost a century ago. You've heard of many of the names if you're a student of such things, but there are some surprises along the way as some regional writers pop up. Emmett Watson, Sandy Grady, and Jim Kobuchar (yes, Amy's father) appear. There are some good writers outside of New York, you know. Schulian provides short biographies of each writer, and they put the contributions of those writers nicely into perspective.

Some of the joy of this book comes from reading about famous events as told by famous writers. Westbrook Pegler on Babe Ruth's called shot. Shirley Povich on Lou Gehrig's farewell. Red Smith on Bobby Thomson's homer. Robert Lipsyte on Clay shocking Liston. Thomas Boswell on Jack Nicklaus' Masters win in 1986. And so on.

To be fair, some of the stories aren't written right on deadline. Bill Plaschke and Jane Leavy check in with long stories that clearly needed time to write - as opposed to 40 minutes - but are certainly worth including here. The approaches are all over the map - rage, approval, fun, fly-on-the-wall, etc.

There probably will be a couple of stories here that you will skip over, but that's to be expected in a book like this. "The Great American Sports Page" works just about perfectly. You don't have to be a writer to appreciate this book. You just have to appreciate good writing.

Be notified of new posts on this site via Twitter @WDX2BB.
Posted by Budd Bailey at 9:14 AM