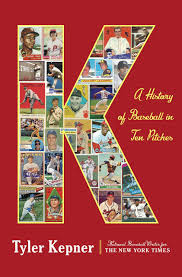 It would seem that Tyler Kepner has been doing some work on the side for the past several years, and I'm not talking about trying to perfect his curve ball.

The New York Times national baseball writer has done a variety of stories in that time on many different subjects. But it seems that when he had the opportunity to talk to a pitcher about the various types of pitches, he jumped on it .Multiply that by a few hundred interviews, and you have the makings of a book. Then throw in plenty of research on the subject, and some time to put it together, and you have that book.

It is called "K: A History of Baseball in Ten Pitches." It probably sounds by that earlier description as if Kepner knew what he was doing, and reading the actual book will back up that claim.

You probably didn't realize there were 10 different pitches out there. After all, most pitchers use three at most. Let's count them off, in order of their appearance in the book. There's the slider, fastball, curveball, knuckleball, splitter, screwball, sinker, changeup, spitball and cutter.

All of these pitches didn't appear on the scene at once, of course. Certainly the game started with the fastball, and then someone in the 1800s threw a pitch that curved to fool the batter. (It's tough to resist a book that includes references to Candy Cummings from that era, a man who may not have invented the curveball but who certainly helped perfect it by all accounts). Then came the variations. Pitchers threw a slightly slower fastball with a bit of break to create the slider. A really slow fastball became the change-of-pace, or changeup. The splitter is wedged between two fingers, and drops suddenly as it nears the plate. The cutter is a fastball with a different grip, so that the ball makes a sudden horizontal turn.

No one masters all of these pitches. What's more, if you aren't really good at throwing them on the major league level, some baseballs will be deposited in the bleachers rather quickly.

We hear stories and voices of the best pitchers of their generations here. Pedro Martinez, Madison Bumgarner, Mariano Rivera, Gaylord Perry, Greg Maddux, Roy Halladay, Tug McGraw, Charlie Hough, Trevor Hoffman and Bruce Sutter all come up in the text. It is interesting just how many pitchers learned a new pitch at some point in their careers, and suddenly they were much more effective. Rivera might be the best example of that; he was fooling around in a game of catch when an altered grip changed the flight pattern of the baseball drastically. Before long, he had a cutter that was essentially unhittable for almost 20 years. It made him the first unanimous choice for the Baseball Hall of Fame.

Admittedly, this is a book for people who are good-sized fans of learning how the game of baseball is actually played. It's very specific and detailed in that area, and a few people no doubt are going to be overwhelmed by all of this information. Still, the subject is handled as well as it can be.

There's little doubt that "K: A History of Baseball in Ten Pitches" is going to pick up some awards at the end of the year, and it's a worthwhile read as another season gets started. And if you have a current or former pitcher on your gift list, by all means pick this up for him.

Be notified of new posts on this site via Twitter @WDX2BB.
Posted by Budd Bailey at 3:36 PM