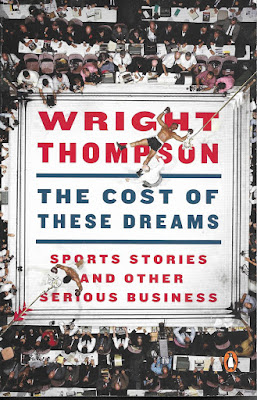 Sometimes the author's name is enough to lure you in when you are looking for something to read. When it comes to sports, Frank Deford and Gary Smith were two of the all-time greats.

Wright Thompson has a very good chance of joining those two, if he's not there already.

Thompson is one of those writers that takes his time coming up with a story. His work is on the long side in this Twitter age, but always rewarding. Therefore, it's good to see that his first collection, "The Cost of These Dreams," is now available.

Thompson started his career working for newspapers in New Orleans and Kansas City. He caught a break in 2006, when he was hired by ESPN. Thompson found a home there, as even the Internet was big enough to hold some of his longer works. ESPN the Magazine also gave him the space to stretch out his stories when needed.

If you read the stories before, they are certainly worth another look now. And if you haven't, you are in for a treat. Here is Michael Jordan at 50, still the same personality as we saw in his playing days but without that main competitive outlet. Pat Riley is shown to be torn between the present and a possible more relaxing future. Dan Gable, arguably the best American wrestler of all time, is still fighting some demons. Urban Meyer tries to put some balance in his life; there's more to tell about that football coach down the road.

Two stories jumped out at me that I hadn't read before. "Beyond the Breach" is a look at New Orleans 10 years after Katrina. Yes, there is some football there, but not a ton. It's about a city that keeps crawling back from adversity as it has always done, and it reads a little like a Spike Lee screenplay. There's also the "Ghosts of Mississippi," a look at the 1962 football team at Ole Miss that was one of the best of the country - at exactly the wrong time for all concerned (note the year and location) and thus was more or less forgotten. That one was turned into an ESPN documentary.

My only complaint about the collection is that it could have used a voice from the present. Where did the story appear? What has happened to subject and author since then? Even so, it doesn't get in the way of one's enjoyment.

I'm not sure what's ahead for Thompson. ESPN recently announced that its magazine would be dying soon, and you'd have to think he might want a similar platform for his work. Then again, times are tough for magazines in general. We'll have to see what happens there.

But, no matter what the state of sportswriting and publication is, Thompson will do just fine. "The Cost of These Dreams" is proof of that. His audience will find him and follow him no matter where he lands.

Be notified of new posts on this site via Twitter @WDX2BB.
Posted by Budd Bailey at 7:01 AM