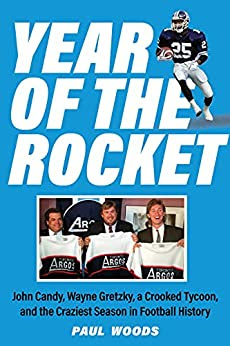 Books about the Canadian Football League don't pop up on this blog very often, and for a very good reason - I live in the United States.

"Year of the Rocket," written by Paul Woods, is the exception.

Raghib "Rocket" Ismael's career is quite a story, at least at the beginning.  He was raised in Wilkes-Barre, Pennsylvania, and went to Notre Dame to play football. The Rocket may not have been the best pure player in the country, but he certainly made things happen. His blinding speed made him a threat to score a touchdown whenever he had the ball in his hand. Ismael finished second in the Heisman Trophy balloting that year, and certainly figured to go high in the first round of the 1991 draft.

However, Bruce McNall had other ideas. He thought he saw a back-door method into the National Football League by buyig the Toronto Argonauts of CFL. If the NFL wanted to expand to Toronto someday - and really, why wouldn't they? - the owner of the Argos might have the edge in winning that franchise. But the CFL team would have to become much more relevant than it was at the time.

So McNall, the owner of the Los Angeles Kings, decided to take a shot at making this all work. To do that, he enlisted Wayne Gretzky, who was playing for the Kings at the time, and John Candy, an actor/comedian from Ontario. They put up a little money, and bought the Argonauts. Then the group essentially bribed Ismael to skip the NFL and play in Toronto. The rookie received $4.5 million per year for four years, making his annual salary larger than the rest of the team's income.

But it didn't work for a couple of reasons. The Rocket was supposed to serve as a spokesman for the team in its attempt to gain attention, and he really wasn't the least bit ready for such responsibilities. Candy tried to fill in for Ismael in a sense, and worked hard to make the Argos go. But the other problem was that McNall was a crook - a go-to-jail-for-financial fraud crook. His sports empire was made out of paper. The Argos hemorrhaged money, and even a championship didn't help. The team, and McNall, ran out of cash rather quickly, and the experiment ended when the franchise was sold. By the way, McNall says in the book that he never could figure out how to get the NFL to add a team in Toronto as long as Buffalo's Bills were just down the highway.

Woods worked for about four years putting all of this together. Some of the principals wouldn't talk about it, even today, and others like Candy had died. But most of the other key personalities were more than happy to speak about this era of Canadian football. In hindsight, most treat it as something of a dream where they look back and say, "Did all of this really happen?"

Clearly Candy is the star of the show here. He was a huge football fan, and it was his childhood dream come true to own the Argos. Candy was full of ideas, and was willing to do almost anything - well, except for investing more than $1 million - to make it work. What's more, John had a ton of fun doing it - as the stories show. There are plenty of other people who were a smaller part of the story who turn up in the book to provide facts and perspective.

If there's a downside to the book, at least for Americans, it's that the Argos' football story needs to be told along the way. Almost all of the names besides the Rocket on the roster and coaching staff will be unfamiliar to U.S. readers. Therefore, it's tough to draw people in to read about a quarterback battle during Toronto's 1991 season.

Even so, 'Year of the Rocket" goes by as quickly as a punt return for a touchdown, as it checks in at less than 200 pages. No, the cast will attract a very specialized audience. If you qualify, you will be entertained.