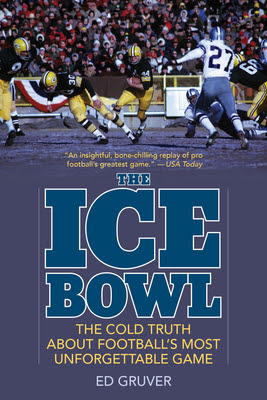 Almost a year after the birth of the Super Bowl, the Ice Bowl was born.

That became the unofficial nickname of the NFL Championship game of the 1967 season. It was played in Green Bay between the Packers and Dallas Cowboys. The winner would go to the Super Bowl, which made its debut on the American sporting scene a year before. It matched the AFL and NFL champions.

Why Ice Bowl? Well, it was cold. Frightfully cold. The temperature at kickoff was minus-15 degrees. It didn't get any warmer as the day went on. Since it was the coldest NFL game ever, the images from that game became memorable. Green Bay picked up a reputation as an ice box on that day, and it lingers to this day.

Naturally, the game led to the production of a few books over the years. One of them was "Ice Bowl," by Ed Gruver. It seems to have originally been published in 1998. Now it's back for something of an encore run.

Gruver wrote the book in a brisk (pardon the accidental pun), easy-to-read way. After setting up the day of the game, the author dives into the history behind the game. That essentially begins with the arrival of the respective coaches in the Ice Bowl, Green Bay's Vince Lombardi and Dallas' Tom Landry. The two had been coordinators with the New York Giants in the 1950s, and it's hard to believe the Giants let both of them go. They both won a lot of games as head coaches.

By 1967, the Packers had established themselves as the gold standard for football. They had won NFL titles in 1961, 1962, 1965 and 1966. So 1967 would make it three in a row, which is rare air. Green Bay was getting old, and Lombardi was about ready to leave coaching, so there was a sense of urgency. The Cowboys had only started playing in 1960. After a slow start, Landry had put together a powerful roster. Their ascension to the top almost seemed inevitable. Almost, because the Packers were in the way.

Eventually, we get to the 1967 season, and the teams begin a march toward another showdown. They both took some detours, but they reached the NFL championship game. No one wanted a game played below zero, if only because skill took a back seat under those conditions. But as football coach Chuck Knox used to say, you have to play the hand you're dealt.

Gruver gets to the game in the final few chapters, and the story picks up in intensity. He nicely mixes descriptions of each play with comments from those involved. Toward the end, the story has the added benefit of the play-by-play of the game as delivered by the Packers' radio network. So you'll learn a lot about what did happen, what the participants were thinking at the time, and what might have happened.

There are a couple of issues with the book, one old and one new. The old concerns the weather. Should the NFL have played the game, no matter how memorable it turned out to be? I think you could make an argument that playing at that temperature was unfair to players and fans as well as downright dangerous. It would be interesting to find out if any lessons were learned from the experience.

In addition, this is a reprint of a book from almost a couple of decades ago. There isn't any need to do much updating most of the time here. Still, the last chapter had some references to participants that obviously are out of date - some of them have died, for example. It wouldn't have taken much work to revise those few portions. Otherwise, readers might be tempted to go to the library or used book store and look for an original copy of the book.

Even so, "Ice Bowl" was written to offer a review and perspective of a famous football game. That hasn't changed now. It still works as a review of a game for the ages.